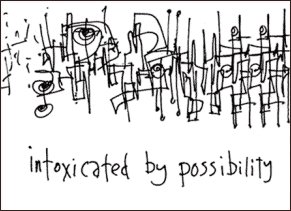 Recently I wrote about “crofting”, which has always had a big influence on my life.

My paternal grandfather was a Scottish Highland “crofter”. He lived on a “croft” i.e. a very small holding of land, where he raised sheep and grew potatoes. I used to spend my summers there as a boy. We were very close.
Crofting is a good life, but not a very financially rewarding one. It’s very self-sufficient, though. The interesting thing for me looking back, is that crofters never did “just one thing”. Every day they had something else going on. One day it might be sheep. The next it might be a job working on the roads for the local council. I knew one crofter who drove the mail van. Another who ran the local post office. They would do their jobs, but after work they’d still have their sheep, cows and potatoes to attend to.
As my dad is fond of reminding me, I seem to have inherited the crofting mentality. I DON’T like waking up in the morning and doing the same thing every day. I LIKE having all these different balls in the air- cartooning, painting, consulting, writing, marketing, blogging etc. Sure, part of me would like nothing better than just “retiring to the desert and making paintings”, but another part of me likes all the running around in different directions. And all this running around DOES get tiring, I can tell you that. Sometimes I LOVE the feeling of being constantly overwhelmed. Other times I utterly despise it.

Since that post I’ve gotten more than a few emails, with people basically saying, “Thank you for coming up with a term that totally describes my life!”
The traditional Highland crofter is quickly becoming a thing of the past. As my uncle, a crofter like his father before him, recently quipped, “We just farm manila envelopes now” [Rural subsidies from the European bureaucrats tend to arrive in manila envelopes]. But as the BigCorp job-for-life also becomes more and more a thing of the past, expect to see more “Crofters” out there, even if like me, it’s no longer sheep and potatoes we’re selling. I think it’s a sweet little term that conveys a lot, especially to those of us who seem to have a built-in aversion to salaried positions in other people’s companies. You?
[Bonus Link: Probably the most well-known book on Scottish crofting. “The Crofter & The Laird” by John McPhee.]