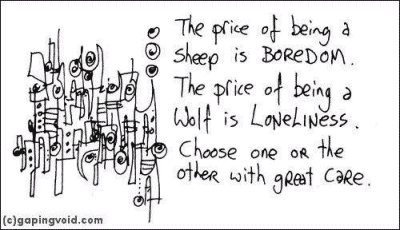 The first chapter of my upcoming book is called “Ignore Everybody”.

The more original your idea is, the less good advice other people will be able to give you. When I first started with the biz card format, people thought I was nuts. Why wasn’t I trying to do something more easy for markets to digest i.e. cutey-pie greeting cards or whatever?

You don’t know if your idea is any good the moment it’s created. Neither does anyone else. The most you can hope for is a strong gut feeling that it is. And trusting your feelings is not as easy as the optimists say it is. There’s a reason why feelings scare us.

I wrote that chapter over four years ago. As I’m currently working through my final edit before publication, I’ve been thinking about some of the stuff I’ve learned the hard way, since first writing this post. Here are some random notes:
1. “Good ideas have lonely childhoods”. When I say, “Ignore Everybody”, I don’t mean, “Ignore all people, at all times, forever”. No, other people’s feedback plays a very important role. Of course it does. It’s more like, the better the idea, the more “out there” it initially will seem to other people, even people you like and respect. So there’ll be a time in the beginning when you have to press on, alone, without one tenth the support you probably need. This is normal. This is to be expected. Ten years later, drawing my “cartoons on the back of business cards” seems a no-brainer, in terms of what it has brought me, both emotionally and to my career. But I can also clearly remember when I first started drawing them, the default reaction was “people scratching their heads”. Sure, a few people thought they were kinda interesting and whatnot, but even with my closest friends, they seemed a complete, non-commercial exercise in futility for the New York world I was currently living in. Happily, time proved otherwise.
2. “GOOD IDEAS ALTER THE POWER BALANCE IN RELATIONSHIPS, THAT IS WHY GOOD IDEAS ARE ALWAYS INITIALLY RESISTED.” The older I get, the truer this sentence seems to be. Especially in industries that are more relationship-driven, than idea-driven.
3. “Fight The Power”. The good news is, creating an idea or brand that fights the powers that be can be a lot of fun, and very rewarding. The bad news is, they’re called The-Powers-That-Be for a reason i.e. they’re the ones calling the shots, they have the Power. Which is why the problem of selling a new idea to the general public can sometimes be a piece of cake, compared to selling a new idea internally to your team. This is to be expected: having your boss or biggest client not liking your idea and firing you, hits one at a much more immediate and primal level, than some abstract housewife in rural Kansas hypothetically not liking your idea, after randomly seeing it advertised somewhere. Which is why most team members in any industry are far more concerned with the power relationships inside their immediate professional circle, than what may actually be interesting and useful for the customer.
4. Idea-Driven vs Socially-Driven businesses; which one are you in? The answer is, of course, both. “What you know” determines what kind of access you’re given to people. “Who you know” informs what kind of access to ideas you’re given, and when. Though all businesses tend to skew differently in either direction. My experience in the wine trade is a good example of an industry that’s primarily socially-driven, at the expense of being idea-driven. I’ve heard a lot of wine trade folk over the years yakking endlessly on about “Innovation!” Why? Not because they necessarily had any actual new ideas worth talking about, let alone acting on, but because “Innovation” seemed to be a word that their big customers [the supermarkets] liked hearing. So they used the word whenever possible, gratuitously or otherwise. In other words, they were acting in a socially-driven manner. Primarily, they just wanted to be liked.
5. “I want to be part of something! Oh, wait, no I don’t!” I’ve seen this before so many times, both first-hand and with other people. Your idea seems to be working, seems to be getting all sorts of traction, and all of a sudden you got all these swarms of people trying to join the team, wanting to get a piece of the action. And then as as soon as they get a foothold inside the inner circle, you soon realize they don’t really understand your idea in the first place, they just want to be on the winning team. And the weirdest bit is, they don’t seem to mind sabotaging the original idea that got them interested in the first place, in order to maintain their newfound social status. It’s probably the most bizarre bit of human behavior I’ve ever witnessed first-hand in business, and it’s AMAZINGLY common. [AFTERTHOUGHT: “People are not primarily governed by their own self-interest. People are primarily governed by their own self-delusion.”]
6. Human beings are messy creatures. I suppose the main thesis to this post is; the hard bit of having a “good idea” is not the invention of it, nor the selling of it to the end-user, but managing the myriad of politics and egos of the people who are supposedly on the same team as yourself. Managing the vast oceans of human chaos that all enterprises ultimately are, underneath the thin veneer of human order.