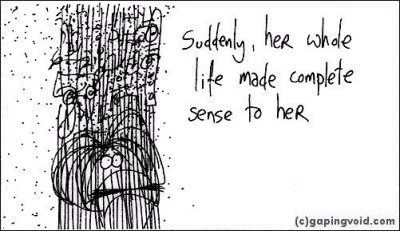 For the last couple of days I’ve been pinging back and forth with my book editor over at Penguin, Jeffrey Krames. We’re about to work through the final draft.
From what I’ve been told, the hardback version of “How To Be Creative” is coming out around Valentine’s day, 2009, give or take a few weeks.
This harks me back to a blog entry I did in October, 2004, entitled “Why I’m Writing A Book”.

I’m writing a book. It’s an expansion on a web post I published this summer called “How To Be Creative”.
(NB: The Book Outline is here)
The premise is very simple:

“So you want to be more creative, in art, in business, whatever. Here are some tips that have worked for me over the years.”

I’m looking at this piece and saying to myself, “Damn, I wish I could still write like that…” But I can’t. When I wrote that, I was a lot more poor, unemployed and desperate than I am now. “Hunger is the best spice”. No money or success can replace the artistic edge that prolonged poverty & under-achievement gives you. Sad but true.
Would I want to go back there, for the sake of “Art”? No. I was there once already. And it sucked.
Yes, it was an adventure. But only in retrospect. At the time, the reality was far more mundane and unedifying. Besides, new adventures interest me now, a lot more than the old ones do. Happy but true.