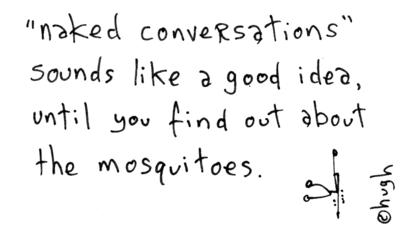 [Cartoon originally published December, 2007. It was dedicated to my friend, the dauntless Robert Scoble.]
As anyone who has been reading Techcrunch will know, the “Is Blogging Dead?” meme has reared its ugly head again.
Well, before we all get dressed up in our best funeral gear, let me say it one more time: The big story is not about blogging. It’s not about Twitter, YouTube, Facebook, Friendfeed or whatever. And it certainly is not about Robert Scoble, Mike Arrington, Jason Calacanis, Nick Denton or whatever so-called “A-Lister” you care you mention.
Yes, again, it’s all about what Clay Shirky said four years ago, in a wonderful interview he did for Gothamist:

“So forget about blogs and bloggers and blogging and focus on this — the cost and difficulty of publishing absolutely anything, by anyone, into a global medium, just got a whole lot lower. And the effects of that increased pool of potential producers is going to be vast.”

I had coffee with Clay a couple of weeks ago. A totally great guy. We didn’t talk about blogs much. Nor did we talk much about Twitter or Facebook.
We talked about something conceptually far simpler: Cheap. Easy. Global. Media.
CheapEasyGlobal is the big story. And it’s here now. It has arrived. And it’s permanent. And there’s not a damn thing anyone can do about it, save for a nuclear holocaust.
Some people will do very well by it. Other people will prefer to stay on the sidelines instead, using the internet to yak yak yak endlessly on about what other people are up to, holding the “players” to far higher standards than they will ever attain themselves. These lovely armchair quarterbacks will be swiftly forgotten by history. Same as it ever was.