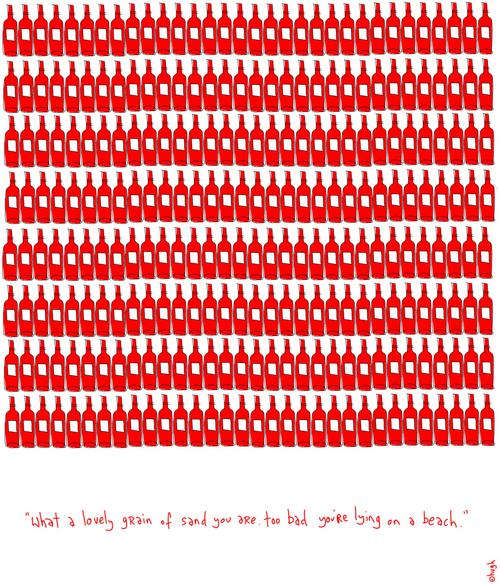 The relatively small, southern French province of Languedoc produces more wine than the entire State of California. Thousands and thousands and thousands of vineyards. Italy alone boasts 500,000 vineyards, and 50,000 individual wine brands. That’s roughly one vineyard for every one hundred people!
This is one of the great things about wine is, of course. There’s so much choice out there, that once you get the wine bug, you easily can spend the rest of your life sampling thousands of them, and never get even close to sampling them all.
But on the other side of the coin, this makes your job as a wine producer VERY TOUGH. If for example, you have all your money sunk into an Italian wine farm, Congratulations, you’ve got half a million other Italians in the same boat as you. That’s a pretty crowded boat, to say the least.
The other day I showed the above cartoon to the owner of a large American wine importer.“What a lovely grain of sand you are. Too bad you’re lying on the beach.”
My thesis that came out of that conversation: Wine has become a commodity. But most people in the wine trade are too self-absorbed with their own wine schtick to acknowledge the fact. OTHER PEOPLE’S WINE may already be a commodity, but NOT OUR WINE, no no no no… Our wine is SPECIAL, yes yes yes yes…
If you want to remove the “commodity factor” from your wine, you first have to admit that yes, you too are also selling a commodity. And then work from there.
To quote a phrase I probably use far too often: “We’re not in the wine business. We’re in the decommodification business.”
So how does one “decommodify” wine? I have no idea. If I knew, I’d be a billionaire.
But what HAS worked well for me so far, is to stop thinking so much about the product- the grapes, the vineyards, the terroir, the hummingbirds gathering nectar in the early morning sun yak yak yak. Instead, I find it far more useful to be interested in the actual people drinking it. Who are they? What do they need? What’s their schtick? What works for them?
What’s true in life is also true in marketing: If you want to be boring, talk about yourself. If you want to be interesting, talk about other people.