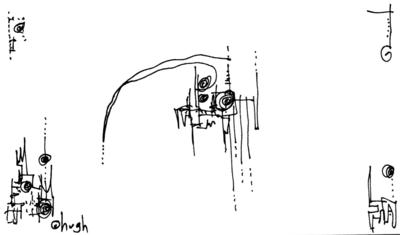 Rabbi Pinny, Johnnie, Euan Semple and myself recorded a new podcast a couple of weeks ago. Johnnie wrote the show notes and originally posted them over on his blog. It was a lot of fun.
Download the Podcast
Podcast RSS feed for Hugh and the Rabbi podcasts

0.00 Intros, Hugh forgets who “the Scottish guy is” and isn’t sure what Euan does but settles for rock star.
1.00 Hugh sets up the idea of love, recalling a talk about this by Euan at Reboot.
1.45 Euan talks about the L word, and people’s reactions to it. It’s about people’s basic desire to connect to each other, caring about things, getting passionate about things. So much of the business world sanitises passion out of things.
3.15 Pinny wonders about how companies show love. References Lovemarks. In relationships, if you don’t go to the nth degree, everything else doesn’t count. Talks about how mistakes by Facebook and Apple get pounced on by the blogosphere.
4.40 Lovemarks proves a red rag to Johnnie’s bull. Love means different things to different people. Johnnie wary of the fanatical idea of love, the pursuit of perfection. It’s more about being human, fallible.
5.50 Euan chimes in against fixation on the romantic idea of love. Instead favours “the passion that grows out of day-to-day stuff”.
6.45 Hugh asks Euan about his World Service experience at the BBC.
7.30 Euan: Roughly 47 different language services in the same building. Lots of characters, different cultures. “If you were climbing ladders, they were all against different walls.” – so less ego and tribalism than in the rest of the BBC. You had to get on quickly with people, the ability to engage and connect, and move ideas round the building was a formative experience.
9.00 Product of World Service is ideas but also the kind of intimacy you can create on radio.
9.50 Hugh talks about the purpose idea – what are we here for, why are we doing this. Trying to get a sense of purpose going.
10.30 Euan: purpose is good, so is obliqueness. Says what he likes about podcasts is that they are not like broadcasts. Meandering semi-conversations that get under skin in a different way than stuff projected at you in broadcasts. Conventional radio output sounds increasingly patronising.
12.20 Euan on how he pays each month to support Leo Laporte’s podcasts, more than half he pays in the BBC licence fee. “That’s me doing that to an individual because I really don’t want him to stop podcasting.” People will pay for stuff that’s passionate and accessible.
13.00 Hugh contrasts Euan’s story with a UK show, Newsnight Review and its affiliation with the Notting Hill cultural elite. New media is a threat, not so much to cash as to old media privilege.
14.30 Euan recalls David Weinberger saying conversations can only take place between equals.
15.00 Hugh on fanboys.
15.20 Hugh asks Pinny a question “as the only guy here with a real job”: does this podcast affect your business.
16.10 Pinny: it’s not affecting the business… what it affected is how people view him. Discusses impact on his employees with Hugh.
18.45 Hugh on podcasts as disruptors. Euan says disruption is a word with all sorts of baggage but we get involved in this stuff because it makes a difference. How can governance cope with these changes? It’s going to change power dynamics and who is successful and why.
21.10 Pinny returns to the theme of love, inspired by his nephew’s wedding where a Rabbi talked about what happens when you aren’t in love with love, but with the other. Companies need to own up to mistakes.
23.00 Hugh: gosh, act like a human being, not a robot. Johnnie: intimacy an important word in Euan’s story. There’s something about “ordinary smallness”, the ability to have a real conversation; how meetings that strive to be effective often fail. The need to feel each other as human beings.
24.30 Hugh on how small town, West Texas experience has affected him. How it’s safe to have a guy walking round with a ten inch knife, because everyone knows who he is and what the knife is for. Euan reminisces about Glasgow and Pinny, Israel.
27.20 Euan: the danger of homogenisation of success. Quote Doc Searls about things being valuable without being important.
28.00 Johnnie on spending Sunday morning with the papers and someone else, where you don’t talk but there’s a feeling of companionship. You can’t put that on a spreadsheet.
29.15 Johnnie on a twitter-related experience of finding work in a very accidental way. If fell out of a conversation where he wasn’t trying to make something happen.
30.30 Pinny: the unplanned as the eureka moments of our lives. Getting beyond ego.
32.10 Pinny on the online course Oprah is doing with Eckhart Tolle. This is why the web was created: to spread goodwill.
33.00 Hugh: a lot of people are trying to use the web to do business the way it’s usually been done, which misses the point.
34.00 Euan wonders about how these changes connect to our spirituality. Hugh recalls a Catholic priest who influenced him. God as a metaphor rather than a bearded sky fairy.
35.40 Pinny the web is teaching religion to say it’s about human beings, not about God. It’s teaching companies it’s about what the customer wants to pull, not what the company wants to push. Strip away the disease of entitlement and learn humility. Connects to the rise of Barack Obama.
37.20 Johnnie on the difference between Clinton and Obama. Clinton’s positioning as the leader, Obama’s emphasis on us.
38.20 Euan: authority used to mean authority as conferred; now it means having a compelling argument or idea.
39.00 Johnnie on authority as being the authors of our own experience. You don’t take authority from the BBC any more, you participate.
40.00 Hugh wraps by asking what advice we’d give corporate man in light of all this. Euan: be brave. Pinny: don’t be stupid (“Be brave but have a day job”) Empty your mid once a day for opportunity to happen. Hugh: be compassionate to those above you. Johnnie: you already know what to do.
44.35 Ends

Two keys on the same chain:
Intimacy vs love
Attraction vs promotion
Thx

I like Euan’s recollection about David Weinberger’s quote. Conversations are tricky things to start. I’ve been trying to get one going with my cartooning blog, but the difference between starting a convo on a conventional talky blog and getting one started on a blog that employs mainly pictures is, I’m coming to realize, that it’s hard to get a dialogue started with just pictures. But to me, cartoons that are drawn with subterfuge in mind should be able to jump-start debate. Maybe mine just aren’t subtle or biting enough. Anyone have any thoughts on this?
http://spinachflame.wordpress.com/