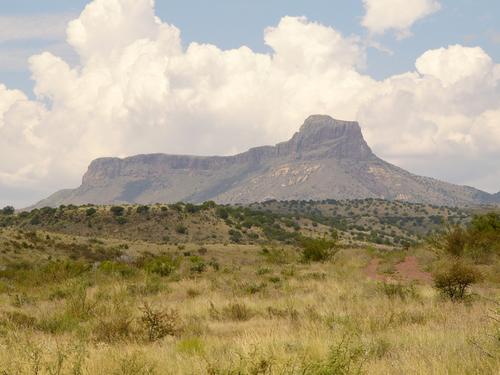 [Cathedral Mountain, 6,122ft. Picture taken bu my father, about 20 miles South of Alpine, Texas.]
It’s been just over a week since I got back to Alpine after SXSW Interactive. Here are some random notes.
1. I’ve not much to report, to be honest. I’ve deliberately been living as slowly and quietly as possible. I think a lot of us are still recovering from SXSW.
2. I have no idea how long I will stay in Alpine. All that I know is that I don’t want to leave right now. I have no plans of going anywhere else, except on business.
3. It looks like I found me an office. Sul Ross [the local university] rents out some office units as part of some sort of “Entrepreneur Center” program that they’re running. Fax, photocopier, all that good stuff. Cost: about $150 dollars a month.
4. Housing is not a problem, either. I was staying with my dad and stepmom, but recently I moved into a cheap and cheerful motel. Hotels, Motels and rented places go for between $500 and $1000 a month, which after London and New York, is not something that worries me too much. Housing prices are about $80-$150K, which again, compared to what I was used to seeing in Europe, is peanuts.
5. If I decide to stay for a long time, I’ll need to buy me a car. I’m thinking a used pickup truck, the kind that runs forever. The local classified ads are awash with them. In the meantime, I just placed an order for a new Raleigh from the local bike shop. The town is pretty flat, and only two miles at its widest, so getting around isn’t much of a problem.
6. Dad and I had a fun time a few days ago, driving up to Odessa, Texas, 140 North East of here. He had a doctor’s appointment up at the Medical Centre there, and I had to go to the Social Security office to get me a new copy of my Social Security card, in order that I could reapply for my old Texas driver’s license. Including the wait in line, I was in and out of the office inside ten minutes, I kid you not. Could you imagine how long that would have taken had I been in New York, London, or Paris?
7. About thirty miles North of Alpine you start leaving the mountains and start entering the cotton fields. Flat landscapes that seem to go on forever, interrupted only by telegraph poles. They’re growing some cotton up there, but a lot of the field are not being currently used- the current high price of oil makes running the irrigation machinery prohibitive. A bit further North and you start entering oil country ands the Odessa environs. Oil Derrecks, Pumpjacks, and lots of semi-ghost town with disused mobile homes and spare parts lying around the place. It takes a lot more people to set up the oil fields than it takes to maintain them, so abandoned dwellings are a pretty common sight.
8. Up in this part of the world [50-100 miles North of Alpine] the one thing you don’t see is a lot of cattle. There simply isn’t enough water for them in those parts, so I’m told.
9. Once you enter oil country you are immediately hit by the rather unpleasant smell of the oil and gas fields. The locals like the smell, though. “Smells like money,” as they like to say.
10. There’s not much I can tell you about Odessa. On first impression, it’s not a pretty place. About 100,000 people. Pick-up trucks, Strip malls, bungalows, oil industry stuff and little else. The aforementioned medical center and the current high price of oil seem to be the main economic engine.
11. We never made it to Midland, the next town over from Odessa, about 30 miles East. That’s where George W. Bush calls home. I’m told it’s not too different from Odessa, only a bit more upscale; Generally it’s regarded as the nicer town of the two. This is where you catch a plane if you’re heading East, from Midland-Odessa airport. If you’re heading to the West Coast from Alpine, you fly out of El Paso.
12. While Dad went for his doctor’s appointment, after I had gotten my Social Security business settled, to my delight I found a Starbucks only a block or two away. So I ordered my usual Grande Latte, hooked up my computer to the internet and entered the same world I enter when I’m in Alpine, New York or London. The internet has become the great leveler for me.
13. Though hardly the most authentic place in the world, if you want cheap and cheerful Italian cuisine in Odessa, you could do a lot worse than go to Corino’s. The people there are pretty friendly.
14. My intention is, once I get settled [Place to live, office, car, driver’s license etc], my plan is to go into overdrive for a couple of months. I have a lot of work needing done.
15. Happy Easter, Everybody!