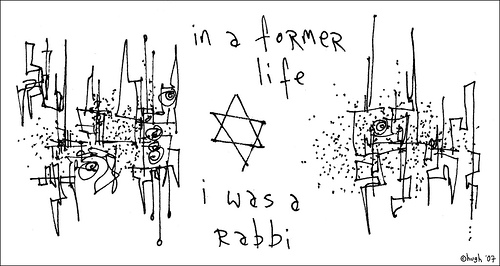 [DOWNLOAD THE PODCAST HERE.]
When I was last in the USA, I had the great pleasure of meeting Pinny Gniwisch, Co-Founder and CMO of Ice.com, who was introduced to me by a good mutual friend, Leah Jones.
Pinny’s a lovely and interesting guy. He’s a Hasidic rabbi, with a long background teaching in elementary schools. Nine years ago he and his brother started Ice.com, an online jewelry store. His company is to selling diamonds what Amazon.com is to selling books. They recently secured $47 million from Boston investment banking firm Polaris Venture Partners, which as the schpiel puts it, “will enable Ice.com to consider acquisitions, build up its e-commerce infrastructure and target new niches in affordable luxury goods.” Not bad going at all.
Though his company has been this amazingly successful, he still carries on regularly teaching kids in elementary school.
There’s not many people who can claim such hands-on experience in both spiritual and internet matters. I thought he’d be a great guy to share a podcast with. I hope you find it as interesting as I did. Enjoy.
The Minutes:
0.00 Intro to Pinny.
2.00 Pinny talks about why he decided against ending up working in a synagogue.
3.00 Pinny explains how, since he became a “successful entrepreneur”, he can talk about spiritual matters in places that, if he were a normal rabbi, he’d never be invited to.
3.59. Hugh: Few people are both Rabbis and successful dotcom entrepreneurs. There’s an obvious tension there, between the spiritual and the entrepreneurial, but that might ultimately make for something very creative and interesting.
4.35 Pinny: “We are finite beings, Masters of the Infinite.”
5.05 Hugh talks about the meaning behind the Chinese Dragon: “Serpent meets the Celestial”: a metaphor for the Human Condition etc.
7.15 Pinny: “No technology will make up for the fact that we are ruled by both the Ego and the Spirit.”
8.20 Pinny talks about the time his teacher told him about his battle between the “animal soul” and the “spiritual soul”. The rabbi said, “Pinny, this is your battle, for the rest of your life. Get used to it.”
9.45 Pinny tells his five kids: “Success breeds Humility.”
10.00 Hugh tells about the time he met Mark Zuckergerg, the founder of Facebook.
12.00 Pinny explains how he spent ten tears between leaving his job as a synagogue rabbi, to starting a dotcom, teaching in elementary schools. Teaching about 11,000 kids a year.
13.58 Pinny: “Talking to kids is where you see the light bulb go on.”
16.30 Pinny asks a group of kids, “Who experienced a miracle today?” One of the kids answers, “I woke up!”
19.20 Hugh talks about how it’s much more easy to find inspiration in “small things”.
20.13 Pinny: “When I visit New York, I get the most inspiration from talking to homeless guys.” Pinny talks about how the guy who gives to charity gets more in the end, than the person receiving it.
22.40 Hugh: “It’s in the small things, where you really see the ‘juice’ of creation.”
23.10 Pinny tells the story of how we went from teaching kids, to starting “Ice.com”, an online jewelry store, with his brother. Inspired by listening to an NPR interview of Jeff “Amazon” Bezos in the car.
24.40 Pinny: “Razorfish offered to build us a site for 3 million dollars.” Eventually he got it for much less from somewhere else.
26.00 Pinny: “We were really doing it for the excitement.”
27.15 Pinny: “Nobody knew what they were talking about back then. It was new industry. Nobody had an internet background back then. It was a bit like starting out like Christopher Columbus, except there were thousands of boats along with you.”
29.00 Pinny talks about the importance of already having family in the jewelry business: “You can’t just wake up one morning and decide you want to be in the diamond business. It’s a business with hundreds of years of tradition and close-knit family ties.”
31.40 Hugh and Pinny talks about the perils of internet company growth. Pinny talks about having to hire “A real CFO and CMO”. The challenge of “Ego vs. The Bigger Picture”.
33.55 Pinny: “Our company just raised $47 million from an investment bank. So know we have to grow the company in a corporate direction.”
35.00 Hugh: “So why did you want to grow the company?” Pinny: “It was inevitable.” Talk about company growth being a manifestation of personal growth within the organisation.
38.00 “More stuff creates more worries.” And then you die with “more stuff”. And nobody cares.
39.00 Hugh talks about his friend, Jonathan’s father, who flew Spitfires in WW2. Looking back, nobody cares about how much “stuff” he had after the war. All that matters was that he “was beating the shit out of Nazis”, and that is enough.
40.40 Pinny talks about how being a rabbi kicks into the human side of his business. Something you don’t see in a lot of corporations. Creating a work environment “Where work feels like ‘Family’, that is the gift.”
42.10 A lot of what keeps large companies in business is coercion and fear.
44.30 Pinny talks about creating a work environment without Fear, like “You were on vacation”.
45.30 Hugh talks about Charles Hope over at Blip.tv. “I only work about 3 hours a week. The rest of the time I just play.”
46.30 The podcast reaches the last furlong. Hugh ends the show with one last question: “You’ve been a marketing guy, you’ve been a rabbi guy. On paper, they are quite different. But what do they have in common? Pinny: Rabbis have to market God, and marketers have to market their products. Sometimes you’re doing the exact same thing.
The reason the temples are empty today, is that rabbis are no longer transparent. Marketers, like rabbis, have to learn to become transparent again.
48.25 Hugh: A lesson in marketing transparency: Moses meeting the Burning Bush. Moses asks God, “Who are you?!!” God is taken aback.
49.00 Pinny makes the point: What’s true in religion is also true in marketing: As the generations go on, people want more transparency.
50.50 Closing thoughts and winding down….
54.04 Finis.

Hugh
Thanks for taking the time to put down such detailed notes. I look forward to listening to this.
Paul

About f’in’ time you started podcasting, yo.

I really enjoyed that. Not every day you meet a man like Pinny, well done for capturing the moment with a podcast!
I have to ask, are you religious? I would guess not from what you write, but the podcast would suggest otherwise.
J.

Clearly I think everyone should listen to the whole thing, but my favorite bits are…
23.10 to 40.40 About creating, growing Ice.com which includes “beating the shit out of the Nazis”
12 to 16:40 About Pinny’s experience between Rabbinical school and the founding of Ice.com
And…um… okay, just listen to all of it, folks.

Wonderful conversation, Hugh and the Rabbi … thanks. I have a dear friend who is Jewish but also very spiritual across the board, it’s all good, opens doors to spiritual conversations, which we really need today.

this is classic interview .. the rabbi and amarketer !!

have only listened about 12min. in, but am encouraged by the conversation about success=humility. something i’ve strived for after my own success, death, and rebirth.
glad to see that others out there value the idea that in business as in all things, the more you know, the more you don’t know.

Lovely conversation. This is something you should really continue with. The idea of just talking with people and letting the conversation flow, while us the listener’s are the fly on the wall. Is exactly what I love. Plus with the fact the Pinny’s experiences so so vastly different than any of ours, makes it so great to listen to. So please keep some fire under you and continue with the idea of being a podcast producer. I know I am always wanting more interesting information, and this is very interesting and very informative. Big thumb’s up from Tennessee

Thanks Hugh, I very much enjoyed the podcast. Honestly, I think the biggest thing I got out of it was the realization that I didn’t have to spend five grand on a diamond ring for my fiancée. Like you said, indirect marketing.

In a former life, I was a Rabbit