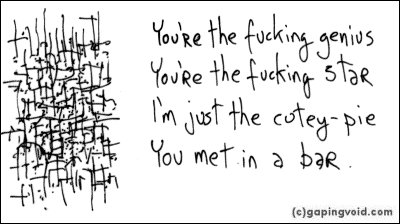 35. Savor obscurity while it lasts.
Once you “make it”, your work is never the same.

It’s a familiar story, re-told countless times. An artist creates something amazing and wonderful when she’s young, poor, hungry and alone, and the world doesn’t care. Then one day something happens and her luck is changed forever. Next thing you know she’s some sort of celebrity, making all sorts of obscene sums, hanging out with royalty and movie stars. It’s a dream a lot of young artists have, something to sustain them during their early, lean years etc.
The funny thing is, when you hear the “rock stars” talk about their climb to the top, the part they invariably speak fondest of, is not the part with all the fame, money and parties. It’s the part BEFORE they made it, back when they were living in a basement without electricity and “eating dog food”, back when they were doing their breakthrough work.
Back when they were young, and inventing a new language to speak to the world with. More importantly, back when they were young, and inventing a new language other people could also speak to the world with.
Some years ago, after he’d been playing stadiums for a while, the rock singer, Neil Young was booed off stage by his fans when he tried playing new Country & Western material. They didn’t want to share his in new adventures. No, they had paid their money to hear the classic rock, dammit. “Down By The River” and “Heart Of Gold”, dammit. And if they didn’t get it, dammit, they’ d be out for blood. As events proved.
It’s hard to invent a new language when a lot of people are already heavily invested in your work [including yourself]. When a lot of people are already fluent in the language you’re currently speaking with, and they don’t want anything new from you. Like the Neil Young fans, they don’t want to see your metaphorical new movie, they just want to watch the sequel to the old one.
And success needs lots of people to keep the show on the road. When it’s just you, a dream, and a few cans of dog food, there’s only one person to worry about. But when the dream turns into reality, there’s all sorts of other people suddenly needing taken care of, in order to keep the engine running. Publishers, investors, managers, journalists, retailers, suppliers, groupies, employees, accountants… and the paying customers. They all have a stake your act, and they all want a piece of the action.
So you crank out another sequel and wait for the money to roll in. It’s a living.
Of course, one reason the rock stars can speak of their basement-and-dog-food era so fondly is because it eventually came to a end; it didn’t last forever. And with all the world tours and parties, this era of creating their seminal work soon became a distant memory. So quite naturally, they miss it. But if they were still “eating dog food” after a few decades, I doubt if they’d be waxing so lyrically.
But as long as you can progress from it eventually, it’s a time to be savored. A time when your work is still new to you, a time when the world doesn’t need to be fed, like a voracious animal.