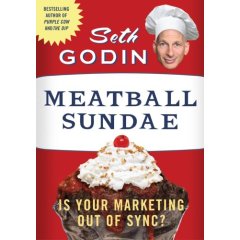 Thanks to Todd Schnick and for having Seth Godin and I on his Intrepid Radio Podcast. We started off talking about the children’s book Seth …

Decades ago, before my first cartoons were ever published, I had this idea that my first published work would be a children’s book. That didn’t …

[Thanks to Seth Godin for sending in these two photos: First, himself sitting underneath the “Dip” piece (he added the speech bubble himself) and then …