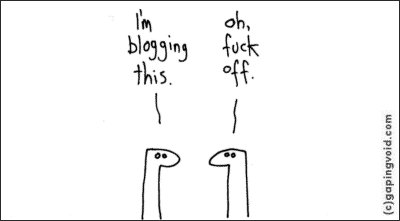 It seems that my last post, “Why We’re All Blogging Less”, got a lot of pickup in the blogosphere. Some people inferred that I was down on blogging, or that I thought blogging was dead, or even that I was quitting blogging altogether. All untrue. So I thought I should clarify:
I remember Robert Hughes, the great art critic saying in his wonderful book, “The Shock Of The New” that the Conceptual Art scene that emerged in the 1960s-1970s was actually good for “Painting”.
Why? Because with everybody else scattering bits of string around gallery floors and calling it “Art”, or covering themselves with butter, rolling themselves in the grass and calling it “Art”, the only people left painting were those, as Hughes put it, “who still actually wanted to paint”.
And paint they did. Hence the big painting revival in the early 1980s. Artists like Julian Schnabel, Francisco Clemente, Basquiat, Keith Haring etc.
I feel similarly about blogs. With new tools like Facebook and Twitter springing up, there’s no need to have a blog unless you really want to, unless you really want to devote that kind of time and effort to it.
As I’ve said more than once before, “Blogging isn’t for everybody, Web 2.0 is for everybody”.
Blogging isn’t dead. Far from it. It’s just a subset of something much larger and more important. Time to quote Clay Shirky YET AGAIN. From 2004:

“So forget about blogs and bloggers and blogging and focus on this — the cost and difficulty of publishing absolutely anything, by anyone, into a global medium, just got a whole lot lower. And the effects of that increased pool of potential producers is going to be vast.”