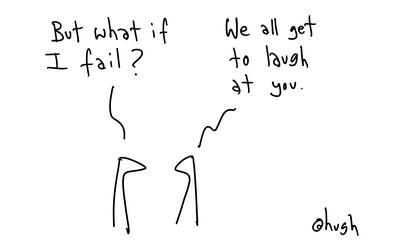 [One of the drawings I did for Seth Godin’s latest book, “The Dip”.]
Social Objects and Homeless People
So I’ve been thinking some more about Jyri’s Five Principles of Social Objects, especially how they apply to gapingvoid:

1. You should be able to define the social object your service is built around.
In gapingvoid’s case, that would be the cartoons for the most part. The straight writing part I’m less concerned about.
2. Define your verbs that your users perform on the objects. For instance, eBay has buy and sell buttons. It’s clear what the site is for.
The verb that springs to mind is “share”. Not only do people re-publish them on their blogs, they’re also allowed to upload them onto other media for free: posters, t-shirts, stickers, whatever works for them. My licensing terms are pretty open.
3. How can people share the objects?
The key word here is “re-publish”. Microsoft’s Steve Clayton is probably the most well-known of my “re-publishers”, as he’s always using the Blue Monster cartoon for different things.
4. Turn invitations into gifts.
Again, the Blue Monster cartoon would serve as a good example. Microsoft employees hand out Blue Monster schwag as an invitation to start a conversation about Microsoft. The Blue Monster’s main function is not about the message, the Blue Monster is about the social gesture.
5. Charge the publishers, not the spectators.
D’accord. The people who put the cartoons on their business cards are doing the paying, not the people receiving them.

Somewhere along the line I figured out the easiest products to market are objects with “Sociability” baked-in. Products that allow people to have “conversations” with other folk. Seth Godin calls this quality “remarkablilty”.
For example: A street beggar holding out an ordinary paper cup cup won’t start a conversation. A street beggar holding out a Starbucks cup will. I know this to be true, because it happened to me and a friend the other day, as we were walking down the street and a guy asked us for some spare change. Afterwards, as we were commenting about the rather sad paradox of a homeless guy plying his trade with a “luxury” coffee cup, my friend said, “Starbucks should be paying that guy.”
Actually, my friend is wrong. Starbuck’s doesn’t need to be paying the homeless guy. Because Starbucks created a social object out of a paper cup, the homeless guy does their marketing for free, whether he knows it or not.
Although I suspect he does. I suspect somewhere along the line the poor chap figured out that holding out a Starbucks cup gets him more attention [and spare change] than an ordinary cup. And suddenly we’re seeing social reciprocity between a homeless person and a large corporation, without money ever changing hands. Whatever your views are on the plight of homeless people, this is “Indirect Marketing” at its finest.
And of course, the way I market my cartoons and my other various enterprises is not all that dissimilar…
[Bonus Link:] A wonderfully thought-provoking podcast interview of Seth Godin. Disclosure: He kindly gives me a brief mention about 23.15 minutes into it.

But what if I fail? Oh, another cliché quote coming on; to paraphrase : “Reach for the stars. You may not get one, but you’ll come up with more than a handful of mud.”

The Starbucks cup inspired two reactions in me. Firstly (and I’m not proud of this) I thought “well if he can afford to get coffee at Starbucks, he’s not doing too bad”. But then I realised that subliminally the coffee cup was reinforcing the idea that my change would go towards coffee rather than alcohol or worse. Now if he held out a receptacle that looked like a little house maybe…

I don’t know if that is the most offensive or audacious or brilliant blog post i’ve ever read.

It may be me, but if it’s the cartoons which are the social objects then what does it mean when the writing appear to be about something completely unrelated?
I’ve had a go at applying Jyri’s 5 principles too.

“And suddenly we’re seeing social reciprocity between a homeless person and a large corporation,”
Bit of a stretch, isn’t it? Shouldn’t you *ask* the guy if he really does make more with the Starbucks cup before you fly off drawing further conclusions based on “I suspect he does”

I agree that the Starbucks cup made you pay more attention than a plain white cup would – which is what companies pay advertising companies HUGE bucks for. How many times have you watched a commercial and sit and wonder what the heck it was all about – but the point is, you were still thinking about it after it was over.
of course thinking about a homeless guy after you are past him doesn’t do HIM any good unless you plan to mail him a check. Just an interesting tangent.

[…] be the imaginative packaging, ‘organic’ or ‘eco-friendly’ label, an aspirational aura, a ‘social object’ or any other quality that lifts the product above merely what it says on the label, merely what it […]

[…] meaning matters can also be good in another sense, as something people will talk about — as a social object, if we borrow the term from Hugh […]

[…] read a blog post recently by Hugh McCleod, where the author suggested that, if you’re doing a start-up for any […]

Who Cares If You’re A Composer? | Buena Park Music

[…] is a social object. There, I said it. Music brings people together. Now dig some John […]

Thinking about social objects and limbo dancing – confused of calcutta

[…] since Hugh Macleod spoke to me about social objects, and pointed me towards what Jyri Engestrom had written, I’ve been fascinated by the concept. […]

[…] the brand in-house”.  In a cartoon and blog post by @gapinvoid, he describes products as “social objects”.  I really love this way of thinking about products and services (which is why I repeat it often). […]

[…] at top of post drawn by the super-talented Hugh McLeod at Gaping Void. Visit. Enjoy. Purchase. 0 Like Posted in Life in General, Personal, WTF? | Tags: […]

We’re Crazy About Books and Confused About eBooks

[…] book is a social object, to riff on Hugh McLeod’s converstion. Not only that, it’s a fetish item or physical […]