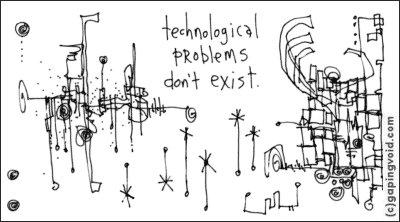 What working with Microsoft has taught me so far:
1. Saying “All software should be free” sounds as silly as saying “All writing should be free”.
2. Saying “All software should be paid for” sounds as silly as saying “All writing should be paid for”.
It depends who’s doing the making. It depends who’s doing the using. Everything is contextual. About half the work I do is free. The other half is paid for. Both feed the other. Contextually.
Conclusion: The Free vs. Proprietary software debate I’ve been following recently is a red herring. At least, it is when you’re thinking about it in terms of either/or absolutes.
So I’m delighted to have found somebody a million times more informed than me, Microsoft’s Bill Hilf talking about this stuff as well.
[UPDATE:] Ha! My old high school buddy, Hamish Newlands, who now works for SAP, pipes in about the Blue Monster:

Continuing the jolly religious theme, we have Hugh, my long time friend at GapingVoid getting into the big Microsoft Beast. Blue Monster indeed, and I am happy for Hugh that he may have another major gig coming up. So I have some words of advice, being used to this kind of organisation, in my life with SAP.
“Run Away, Run Away before they eat you! Behind you! Run faster!”

Some critics think [Hugh is] selling out. I don’t. I think he’s having a huge impact on an organization–from the outside–at the same time that he demonstrates how just about any large organization can rethink its role in the world. And he’s doing it in front of all of us, without a net.