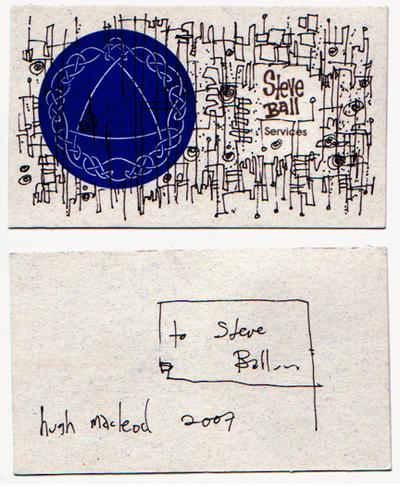 I’m in Manhattan, stopping over in New York on my way back home from Seattle. Tonight I’m having dinner with my old friend, Mark Mann.
On Friday I spent the entire day at Microsoft, which was really amazing. All these insanely smart people everywhere. Wow.
The day had many highlights, but I think my favorite would have to be meeting Steve Ball. We had a really great conversation mostly about Robert Fripp, Love and Vista [Steve used to play in Robert’s band]. Steve writes about it here. He played some really incredible guitar, and I drew on one of his business cards [see pic above]. It was a really pleasure and honor hanging out with him.
Another guy I really liked was Jason Matusow. He had some seriously interesting things to say about Open Source. Apparently he knows my friend, James Governor as well, who he spoke very highly of. Small world.
Thanks especially to Kris Fuehr, who made the whole day possible. It was great hanging out with you, finally. Also thank you for leaving the following comment in a recent gapingvoid entry:

Thomas, you may be right that GapingVoid is assimilating Microsoft.
I had the great honor of spending the entire day with Hugh yesterday. One of my colleagues at MS said after the meeting as he shook Hugh’s hand: “Thanks Hugh, you really rocked my brain around”. I think that sums it up. Hugh’s probably on a plane to NYC now. What’s fascinating is that Hugh just ‘is’. He doesn’t wear his agenda on his sleeve and, as you point out here, his curiosity and additive approach affords him great respect. He opened my eyes to a bunch of things. The ecosystem, the subtleties, the no zero-sum game, heck even music references.
Speaking of music–We met with Steve Ball which I’m sure Hugh will write about it. (I took video on our camera phones). A conversation with Steve is a sensory cornucpia. Steve is responsible for the way that Vista greets you each day. Poor Steve, a mountain of talent, he’s trying to inch some of it into the millions of desktops and hampered by the need for Vista to be everything to everyone. (no electric guitars…wouldn’t want to offend grandma!) Fascinating conversation between Hugh and Steve. They connected at so many levels conceptually, musically, socially, and there was this “jiffy pop” effect where they suddently were into a zone of thousand ping-pong phrases finishing each other’s sentences, etc..
I have to say that the art Hugh practices requires a certain ‘Master Po’ quality to it. He has to help people realize things on their own by asking questions. You then have the chance to internalize them – own them as your own. Here, I am Grasshopper and while many times I understand what Hugh says, sometimes it takes me a few hours or days to really internalize it, but it eventually happens and Hugh is pretty patient. (I think)
Hugh’s curiosity with Microsoft comes not from anything related to ‘sell-out’ (by any means) It’s his interest in the re-invention. The simple models that Hugh was white-boarding with us yesterday were so deep and meaningful, but so simply expressed. I think this symbiotic relationship is far tipped in Microsoft’s benefit vs. Hugh’s so you should try some different words than ‘sell-out’. Maybe ‘point-out’?
Quick sidebar that made me chuckle (and it gives me a chance to try on some of what I’ve learned). Hugh and I used the hand-manipulatable Virtual Earth glass table). The demo lets you use your hands to zoom/pan/move the 3D map and Hugh asked if this was Google Earth.
Now, shutting off my cheerleading tendencies where I normally would say: “yes! It’s Microsoft’s Virtual Earth which is so cool in the following ways…..”
Rather, I’m going to say: Microsoft does have a earth-to-street-level 2-D & 3-D mapping solution. The team who worked on it were asked to build features that would be more compelling and useful than anything currently available. You can try it an see if they succeeded in doing that local.live.com. Google and Microsoft each have areas of strengths in different cities. Many people are comparing different cities and discussing which they prefer and where. e.g. while Google has a 3d rendition of a stadium in San Francisco, Microsoft has a detailed view of the building in the Vegas strip. Which you pick may depend on which areas you focus on. You can see a side-by-side comparison at http://www.jonasson.org/maps/.
A lot of people are infected with the HughTrain bug. Having him explain it in person has been even more enlightening. I think next time, we’ll just reserve a room for 500+ and broaden the discussion. Next trip Hugh?
HINT: Hugh’s masterplan? Every time the blue monster is exposed to techies through Microsoft or other channels, Stormhoek’s name is embedded directly to its target market. Mwah, ha ha! Happy to oblige, Hugh. It’s brilliant.
-Kris

And the geek dinner that followed in Pike’s Market afterwards was terrific, as well. Thanks to Eric for pulling that together.
I’ve had a really great trip this time round, I have to say. This whole Blue Monster thing seems to be taking on a life of its own. Steve and I have lots to talk about, when I get back to London.
[UPDATE:] The latest Blue Monster lithograph finally sold for £150 [approx $300 US] on e-Bay. Wow.

Maybe one day I will have a conversation with you, too. From all indications and reports, we seem to be quite similar in the experience of us. I’m in Philadelphia — next time you’re in NY, give me a shout, I’ll take the train over. Promise.

Fripp seems to be all around you Hugh. 😀

You are in the city! If I had known earlier I would have passed on the “Fight” party last night and checked to see if you were doing it up with any local watering-hole in the wall geek gang.
Well, the one thing I always look forward to is “the future”…
My best to your Blue Monster!

hey hugh thanks for the shout out. it is indeed a small world. jason is just excellent- a huge asset to microsoft, and i am glad you concur. he has great pragmatism, while also having something of the streetfighter about him.

What a great compliment, nice to be appreciated.