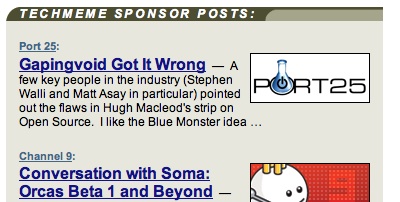 Heh. Nothing like seeing “Gapingvoid Got It Wrong” on the front page of Techmeme to get your attention…
OK, so it’s on the advertising section of Techmeme, still, it’s pretty prominent. Prominent enough for me to go “Oops”.

Their definition of the problem includes long-term viability, mission-critical support, and interoperability with their other technologies. So what this quote means is “if you have a technology for me – open source or not – you have to provide for my key concerns.” Companies like Novell, Red Hat, JBoss, and MySQL have built businesses based on meeting these needs. This is reality. It is foolish to label these companies and their customers, users, and community as playing with things that are “not proven” or “science experiments”.
This is not a war. This is about technology.
It’s only a war when we hold on to hunter-gatherer era tribal mentalities and say “Our way is good! Their way is bad!”

It comes off the Microsoft Port25 blog, the latter I only became really aware of after my friend, James Governor enlightened me.
[UPDATE: Terrific Stuff from Vijay:] “Nice to see Microsoft people feeling uncomfortable with Hugh’s post and coming out quite strongly against it. It shows how far Microsoft have come. I hope the Opensource guys are taking notice of Microsoft’s defence of it!”
[Great, great comment- Michael Neel:] “Open, Closed, Microsoft, Sun – it doesn’t matter. _Software has no value_ (nod to eric raymond). What has value is the people, companies, and support behind the software. If software had value, then upgrades and new versions wouldn’t replace prior versions. Mac OS 9 anyone? Windows 98? Apache/Linux/MySQL – great support and people involved – high value. Sharepoint 2007 and .Net, again great support and people involved – high value. When I write code for someone they are buying me, not the code. I’m the one that brings the value.”
[Related Link:] “The Case For Technological Atheism”.