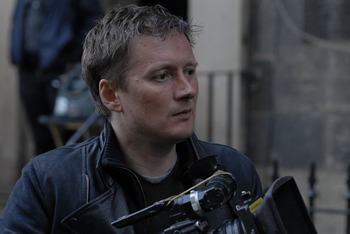 Hallam Foe is about to have its first big screening, at the Berlin Film Festival on Friday. The Director, my old highschool friend David MacKenzie [pictured above], writes about his pre-festival jitters.

I am very proud of Hallam Foe and I think it is a strong, vibrant and interesting film. But boy am I nervous about this first bit of public exposure – apart from a small bloggers screening and the cast and crew screening (which both went well) the film has never gone before an audience. I’m nervous because I know it is a strange gem of a film, but inevitably it won’t work for everybody. My only hope is that those that get it and respond to the film will be the majority and those that don’t (the really straight, soul-less ones!!!!) will be the minority. But who knows what will happen come Friday. All I do know is that I have to expose the film to audiences sometime and that time is rapidly approaching!

Congrats, Dave. It’s a great movie, and you should be proud.
Meanwhile, I’ve had about 100 people e-mailing me about Friday’s London blogger film screening for “300”. Thanks for the interest, Everybody. I’m just waiting for final confirmation from Warner Bros about how many people I’m allowed to invite.

Got my invite this morning Hugh. Many, many thanks!
PS my bottle of Stormhoek Pino Grigio went down a treat with the girl on Vday!