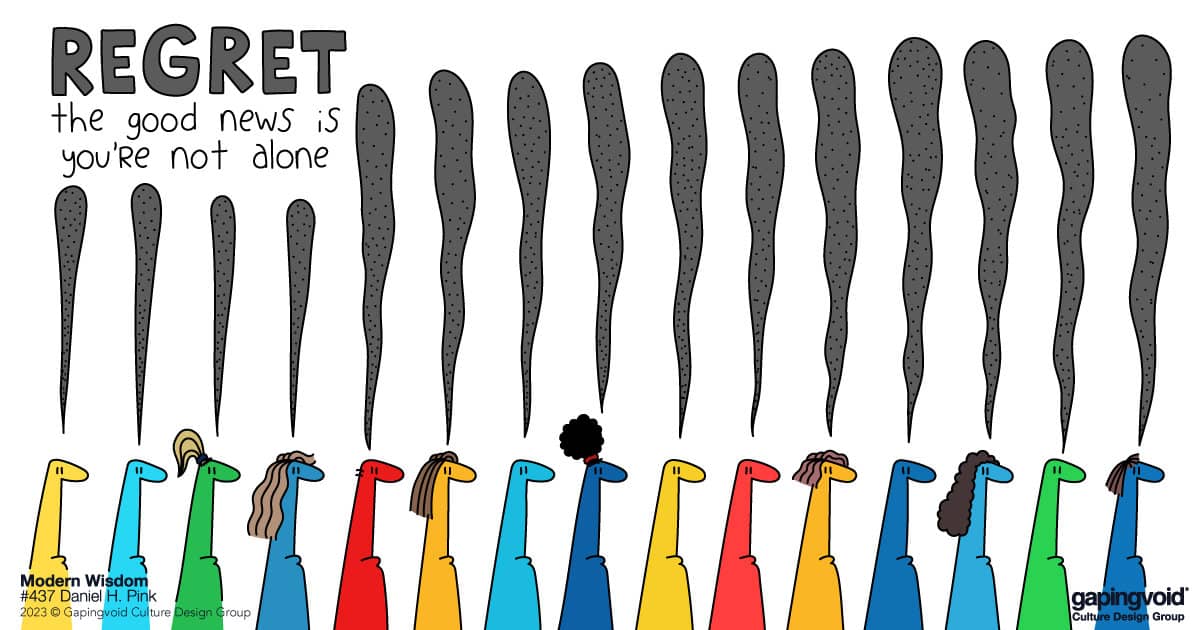 In his latest book, “The Power of Regret: How Looking Backwards Moves Us Forward,” Daniel Pink opens with the following story about the great French singer, Edith Piaf (paraphrased below):

Within three years, after a lifetime of alcoholism, drug abuse, failed relationships, financial difficulties, personal loss, and all sorts of tragedies, Piaf died of liver failure at the young age of forty-seven.

I regret nothing? Highly unlikely. It seems like she had plenty of regrets but was just in denial. Defiantly so.

To be fair, the idea of regretting nothing is very attractive. Everyone has a wee part of them that would like nothing better than to be Frank Sinatra singing: “Regrets, I’ve had a few, but then again, too few to mention.”

But sadly, that’s not how we humans work. As Dan Pink explained on the Moden Wisdom Podcast #437, the Good Lord gave us regret for a reason. Regret is a built-in mechanism that keeps us from making the same mistakes over and over again.

You regret drinking too much in college? That regret kept you sober and working hard in your mid-twenties and thirties.

You regret screwing over your business partner? That sense of regret keeps you from doing that ever again. Or at least (we hope) thinking twice about it.

In other words, having regrets is natural. It’s how we’re built. Regret is useful because it a) clarifies in our mind what’s important and b) instructs us how to do better next time.

When researchers studied emotion in the 1980s, the two most popular ones by far were love and regret. Regret is one of our biggest drivers. What is NOT natural, or at least, not very sustainable is the popular idea that having “no regrets” is something we should strive for.

Mini Insight: Jacinda Ardern recently shared she has ‘no regrets’ after stepping down as New Zealand’s Prime Minister. While we think she probably has some (and that’s not a bad thing), we applaud her demonstration of vulnerability. If you stop pretending and start being vulnerable, your career will benefit.