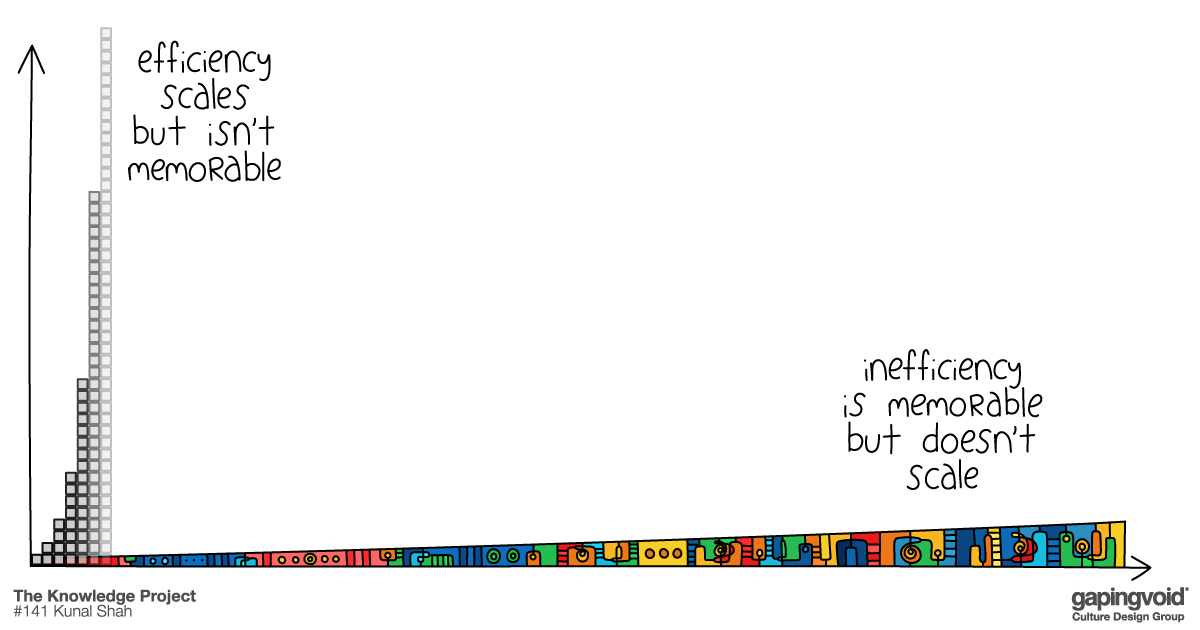 This email is inspired by Episode #141 of The Knowledge Project podcast, featuring serial entrepreneur and incisive business thinker Kunal Shah.

That’s the choice life offers you.

Entrepreneurs have two poisons to choose from.

It’s the eternal, seemingly prehistoric debate of quality versus quantity.

(Rivaled only in intensity and duration by the cup-half-full versus cup-half-empty debate).

Fortunately, for entrepreneurs, there’s an escape hatch that doesn’t involve ingesting any (metaphorical) poison at all.

Alexander the Great took this escape hatch in 400 BC when he arrived at Phrygia and stood before the famed “Gordian Knot.” It was prophesied that he who could unravel the knot would go on to rule all of Asia, an accomplishment very much in line with Alexander’s vision board. He struggled with the knot for some time, and it seemed impossible to unravel.

But then he had an epiphany.

He unsheathed his sword and slashed the knot in half.

He won not by rearranging the pieces on the board, but by changing the rules of the game.

The entrepreneurial equivalent of slashing the Gordian Knot is not choosing scale or excellence, but innovating ways to scale excellence.

In fact, taking this escape hatch, rejecting both poisons, and slashing the Gordian Knot, is the very meaning of entrepreneurship, and of transformation.

This is the difference between a businessperson, who chooses quality or quantity, and an entrepreneur, who uses their imagination to break the rules and achieve both.

So… size up that knot, sharpen your sword and get slashing.

Break the rules that aren’t real.

I often refer to this as the Efficiency-Effectiveness trade-off. The balance between the two very much is very contextual. Generally, Effectiveness is more important the higher the degree of uncertainty. Efficiency comes in when you have got things more figured out, as as you illustrate, you want to scale over size and/or time.

This is a classic challenge of “scale up”. You start with a focus on Effectiveness, but at some point you have to pivot to a higher mixture of Efficiency. Much like a poker player switches gears in their playing style at a certain point in the competition. Or like a rocket jettisoning its effective but inefficient booster rockets.

But the shift doesn’t always happen from Effectiveness to Effectiveness. It can happen the other way around. For example, going on vacation. During the planning stages, you focus on Efficiency by researching, shopping around, planning, pre-booking, etc. – everything to get your trip as smooth and affordable as possible. But once you are enjoying your special trip, the most important thing is Effectiveness. If that means over-paying for a cab ride to not miss a connection due to some unforeseen event or not wasting hours waiting to get a modest extra discount, then so be it.