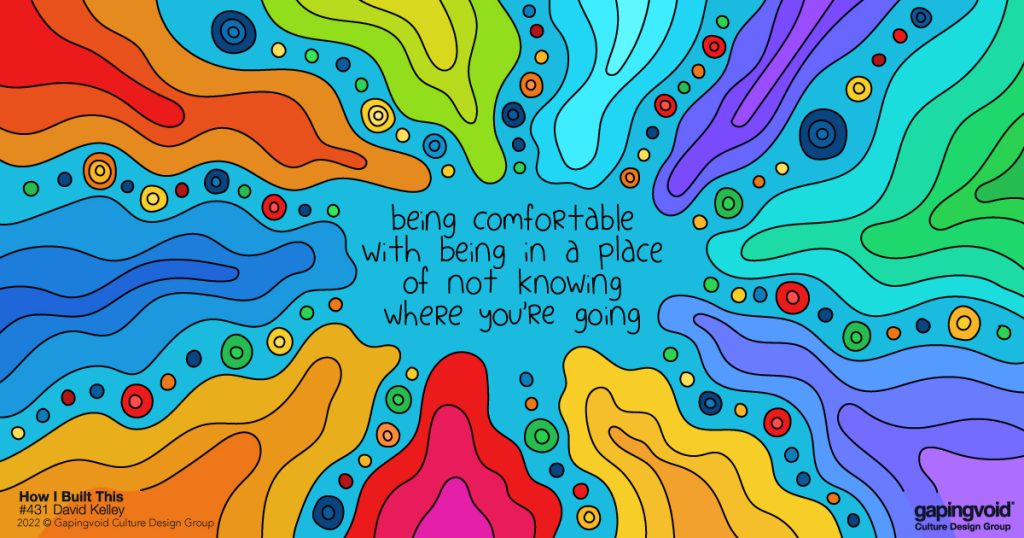 This image was inspired by a thought from an interview with IDEO’S Founder and Former CEO, David Kelley, on the How I Built This Podcast on NPR, Episode #431.

How I Built This is a great podcast and we had an “aha” moment listening to episode #356 with the co-founder and former CEO of Mailchimp, Ben Chestnut (a lovely fellow and good friend of Gapingvoid). He admitted to the host that most people at the top of the business food chain are just “winging it.”

i.e. Nobody’s really in charge. We’re just making it up as we go along.

This idea is totally terrifying at first but gets strangely reassuring after a while. The last thing the world offers anyone is certainty, and to live like that’s not the case is a recipe for disaster.

So we were delighted to learn several episodes later (Episode #431) that the Founder of IDEO, Dave Kelley, focused on building a culture that allowed his employees to be “comfortable with the idea of not knowing where they’re going.”

The thing is when you’re trying to design a solution to a business problem, if you know what the answer is in advance, it can’t be a particularly hard question. In the same way, it’s not much of a movie if you can already guess the happy ending in advance.

In the real world, it’s solving the hard problems that make the money. And as we inferred, those don’t often come with a lot of certainty attached.

Everyone likes certainty. We’ve evolved over millions of years to feel that way. But it’s necessary to know how to happily and effectively do without it.

Dear gapingvoid. I have been following Hugh for decades now. Is there still a possibility to buy some of the art? The image that went with this email in particular.

Thank ypu for your reply