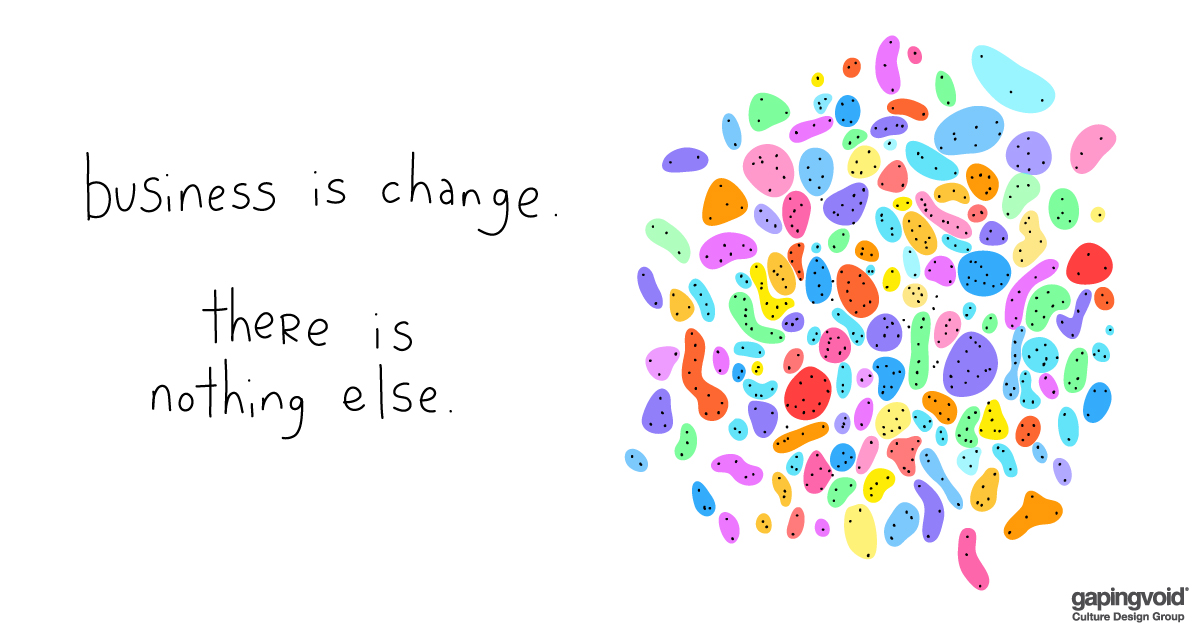 It got us thinking again about  “Digital Transformation.”

DT, as you know, is a big deal. Nearly every organization of size struggles with it.

The trouble starts when you start asking people what DT actually means. What is it, exactly?

And people kinda scratch their heads. It’s hard to nail down.

This lack of mental traction we think is because of poor word choice. “Transformation” is not really a word people use to describe everyday life.

Nobody ever gets out of bed in the morning and says, “I’m going to transform myself today!!!” It’s more like a word out of a superhero movie. By itself, it sounds ridiculous.

What people are really talking about, in more everyday language, is “change.”

Because as the image says, “change” is the Alpha and Omega of business.

All DT is, then, is using technology to create and manage change at an ever more accelerated and effective rate.

For all the technical wizardry and big-budget enterprise software associated with DT, it’s really just common sense more than anything else.

The other thing to remember, of course, is that technology is not the problem, people are the problem.

Many, if not most, DT initiatives fail, and they fail mainly because of cultural issues i.e. human beings.

Culture is key to DT because all roads lead back to culture in the end.

I would say there is a difference between IT enabled change and the digital transformation of business or societies. An example of Transformation in the second case is when instead of travelling to a book shop you click on your phone a few times and the book arrives through your letter box a few days later. That is a transformation in business practices and personal lifestyle. It is the same with internet shopping in supermarkets . If a company digitises its normal practises so they have nhs patient records on computers instead of in filing cabinets then that might be change but the processes would have hardly been transformed.