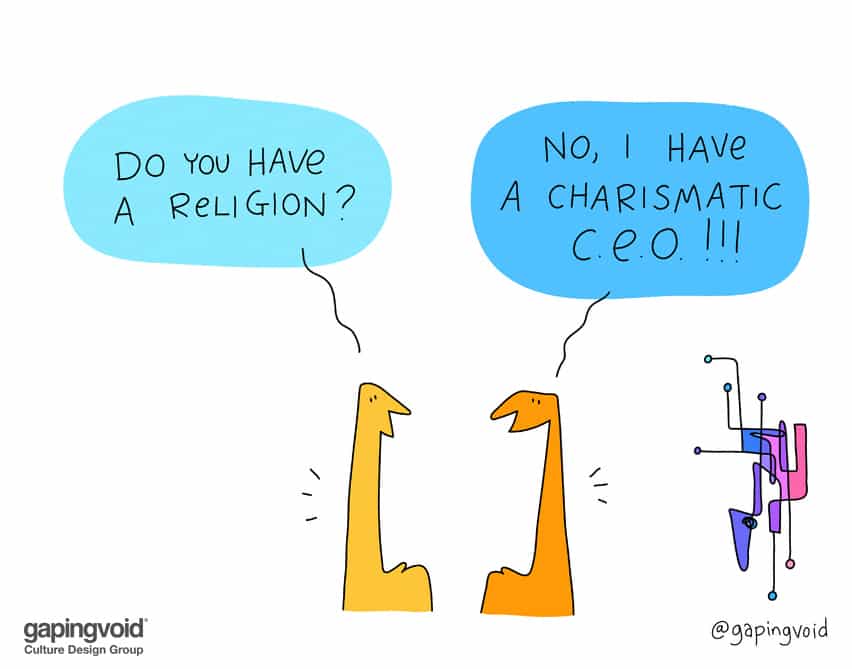 It’s the oldest line in the book: “I’m not selling insurance, I’m selling peace of mind.”

It’s just that in terms of finding out which angle works best as a sales pitch, the pendulum is always swinging between the two.

But the pendulum never stops swinging.

A few years ago, a few bright CEOs got the idea that they’d get more traction if they stopped talking like the normal, dry, bean counters (like most C-Suite folk are), and started talking like people on a spiritual quest.

Spiritual hunger, in both the religious and secular sense, is one of the great human constants, so they’re always going to be a market to scratch that itch, right? Makes sense.

So begins the great wave of what Professor Scott Galloway calls “Yoga Babble” i.e. “It’s as if my yoga instructor went into investor relations”.

“Mr. Neumann found that out swiftly when WeWork’s I.P.O. discussions with investors indicated the company might be valued at just $15 billion — a staggering erasure of value since January, when the co-working venture was said to be worth $47 billion. WeWork, known formally as the We Company, became something of a laughingstock in investing circles after issuing a prospectus that began, ‘We dedicate this to the energy of we — greater than any one of us, but inside all of us.’”

There’s nothing new here. Aristotle himself said that too much of any virtue becomes a vice eventually. Everybody likes hearing a little bit of airy-fairy, New Age Horses***, even Wall Street. Just make sure you have the other side of the pendulum covered.