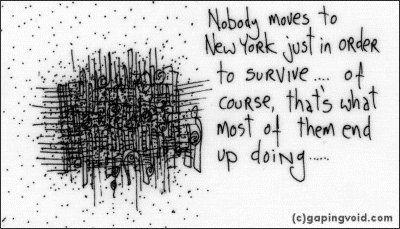 [The following was originally posted in March, 2006. Appropos to a lot of the conversations I’ve been having recently:]

Blogs are like hammers. They are tools for building stuff.

When you talk about building a house with a carpenter, you don’t mind him talking about his hammer for a while.

Nobody minds indulging a craftsman, within reason.

So you think yes, hammers are good things, and indeed his hammer looks like a particularly fine example.

“Cool. Now let’s talk about the ACTUAL HOUSE you’re going to build for me…”

And if the carpenter is any good, he won’t have any problem with that.

Ah, and theta’s another issue altogether 😀

Jacob, that’s an excellent insight, Thanks 🙂

It’s part of the human condition: We often think we’ve arrived, but then we suddenly find out that the destination has changed.

Story of my life, anyway 😀

So having the best tool doesn’t really mean shit…right?

I’m a writer. I blog about writing. And stuff.

I started my blog 8 months ago and also flung myself off the Twitter deep end at the same time.

About 2 months ago, I realized: I can either tweet about writing, or I can write.

Sometimes the twain can meet.

And because I don’t have enough to read (har har), I’ve subscribed to your blog. ; )

Yep, the older I get, the more I see “Real Writing” and “writing about Writing” as two COMPLETELY different things….

Oh, the lines that blur us, always…

The tool is fun to play with. The house takes work.

That’s why you see lots of tools. A lot less houses.

I started following your blog just the other day because of a retweet about you reclaiming blogging vs Facebook and the Twitterverse. I’m attempting to reclaim my blog and my writing productivity by backing off the others too, and simply using them as a “tool” to spread my blog and thoughts further. I have more to say than I can put out there in 140 characters. I’m guessing you do, too.

This blog post tells me one thing- You are the carpenter, this is your tool and you’re kinda tired of talking about “it.”

Can’t wait to see what kind of “house” you build for us to visit! ;o)

I told myself a while ago: As long as I’m still drawing cartoons, the rest of the equation will fall into place.

But I think the main focus of gapingvoid from now on, besides the cartoons, will be “Social Objects”