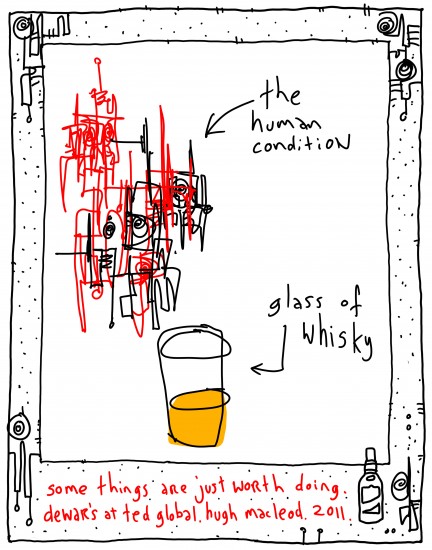 [One of the Dewars drawings I did while attending TED Global etc.]

[Today’s guest post is by Jason Korman, my business partner since 2005, and CEO of gapingvoid]

“The Market For a Scotch to believe in is Infinite”

There are millions of cases at stake for the guys who get the messaging right.

We’ve had Scotch on the brain lately. We’ve done wine, we’ve done suits and we’ve done tech, but Scotch has its own particular set of challenges.

What makes any bottle of scotch different? And, does anyone care, anyway? There are, what Hugh’s dad used to call, the “whiskey bores” who drone on and on about all things whisky, but I’m told there aren’t that many of them left. So, what matters to everyone else?

There is the realm of the single malts and high end scotches. But they seem to need to be marketed more like Congac or Champagne, a bit of bling, sexy packaging, and hyped up associations.

For more broad market Scotch, the opportunities are much greater and the challenge much more complex. Scotch is a distinctly masculine product. It is strong, it is interesting, is implies thought and intelligence. It s a product that wants to have meaning.

Given that, what we see mostly in Scotch marketing is a reliance on ‘authenticity’, with everyone trying to have the most authentic conversation grounded in centuries of history. The question is really: is this relevant? Once a consumer knows your  Scotch is ‘for real’, do they care enough to want to know the details? I’d guess, probably not.

With alcoholic beverages, what you do have is a desire from the market to want to know: Why? What do you stand for? Why do you exist? And does your brand represent something that I believe in – does it share my world view.

J&B says, “Let’s Start a Party”. I know that they are trying to make an old brand younger and relevant. But, OMG, does it seem disingenuous. It comes across as a little inconsistent with what the product is about. It’s not tequila, its not vodka, it’s really NOT a party drink.  It feels like granny dancing on the table at your cousin’s wedding – kinda cringeworthy and creepy. Oh, and in an acknowledgement that even they don’t buy into the party thing, they also tell the story about Mr. Justerini traveling from Bologna to London in 1749. Not sure what they’re thinking, but stream of consciousness brings me to paraphrase the Artist Formerly Known as Prince… “Let’s party like its 1749”.

Chivas goes with “Live with Chivalry”, and tells “The Story Behind the Legend”. It’s place centric, it’s a nice story about a Scotsman traveling to NY a hundred years ago. But, it sounds a lot like things we’ve heard before. More importantly, they seem  unconcerned with relevance in 2011. Their ultra-produced videos are like Public Service Announcements, urging people to be nice. Yawn.

As with both of the above, Dewars goes with the place centric, authentic Scottish thing, so they cover that base. But it feels like a brand that wants more. Their messaging is really very ‘of the moment’ and involves people who are actually alive today – It focuses on the top bit of Maslow’s hierarchy. They want to find people and facilitate people being self- actualized. The message is, as beings we are happier doing things that we believe in.

A bright spark at Dewars had the idea of aligning with the TED conferences. After all, Ted’s speakers do, by definition, embody the qualities that Dewars represents.

Enter Hugh. They also hired Hugh to draw at TED Edinburgh and distill the speakers ideas into his style of illustration.  Hugh likes to say that his goal is to draw a cartoon that rips your face off the first time you see it, and is still doing it and the tenth time.

One of those is posted above.

We ask ourselves: Is Hugh’s style too edgy, too disruptive, not art directed enough, to be used in main stream media? How can a brand like Dewars better communicate what it stands for than through one of Hugh’s cartoons?

In today’s world, where everyone is saying advertising is dead, what they are really saying that advertising the way it used to be done is dead. Giving people something they believe in, in a way that they can’t help but notice, is where the action really is. Getting noticed. Doing stuff that gets noticed, doing it smart,  and in a way that your audience will think is cool, is where its at. Have beliefs that are strong enough to build a movement, not just a brand.

We’ve got Scotch on the brain, and we’re liking it. A category ripe for disruption.