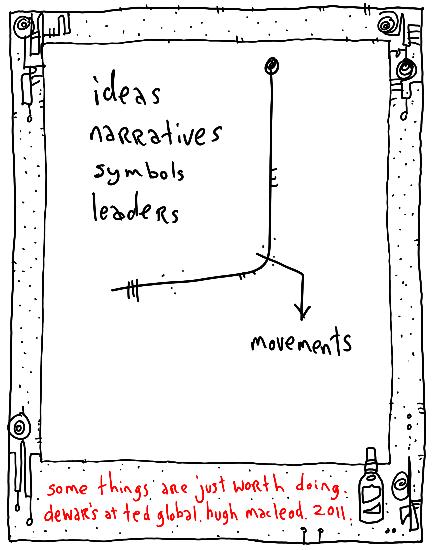 [The Dewar’s cartoon I did for Maajid’s talk etc.] 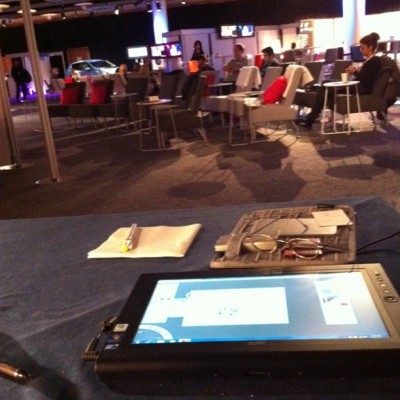 [View from my drawing tablet: Downstairs in the chill-out room.]

[I’m still in Edinburgh, and like everybody else, still recovering from a very intense week at TED Global. Here are some notes from an incredible event, in no particular order:]

I attended TED on behalf my client, Dewar’s Scotch. The idea was to create cartoons that gave justice to the Dewar’s idea, “Some things are just worth doing”.

Which ties in with the TED idea, “Ideas worth spreading.”

Which ties in with one of the great themes in my work these days, “The Unification of Work and Love”.

i.e. Ideas are all very well, but without some sort of action to follow, they’re not much use. Ideas don’t exist in a vacuum.

Nobody reading this, including me, want to spend their whole life, sitting on their ass, thinking big thoughts but actually doing nothing.

2. You’ve heard of live-blogging, yes? Well, I was “live-tooning”. Drawing cartoons on the spot, trying to capture all the ideas that were flying at me at 200 mph. Over four days, I drew dozens of them. The cartoon above was one I did for Maajid Nawaz. He gave a great talk on how to fight extremism on a global level:

Why do transnational extremist organizations succeed where democratic movements have a harder time taking hold? Maajid Nawaz, a former Islamist extremist, asks for new grassroots stories and global social activism to spread democracy in the face of nationalism and xenophobia.

One of the points Maajid made was how movements require four elements in order to be viable: Ideas, narratives, symbols and leaders. So I ran with that. Click on the link and watch the video to hear more.

At the event, I gave Maajid a hand-drawn copy of the work above, poster-sized. He was a very gracious man, I thought.

3. Then there were the “Conversation Pieces”. 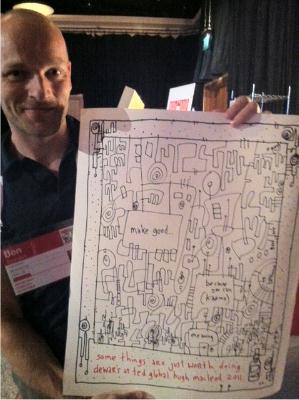 While talking to the polar explorer, Ben Saunders, I had the idea to make a drawing WHILE talking to him. A real-time conversational doodle. as it were. A “Coversation Piece”, as it were. Above is a picture of him holding the final result.

It’s a question that never gets old: Here you are, surrounded by all these amazing people and ideas, now how do you use what you do (in my case, my cartoons) in order to interface with them? Meaningful interaction with other people- THAT’S what makes work interesting, NOT the money.

A TED-ache is what they call it: When your brain is so stuffed with all the ideas and stimuation and conversation flying around for four days nonstop, your brain can no longer keep up with it, your brain kinda wants to explode.

I came away with enough material to fill MONTHS of blogging, MONTHS of catooning. Like everybody else at TED, I’m feeling pretty  overwhelmed yet supercharged.

It was an amazing experience: Hundreds of insanely bright and creative people, doing insanely interesting things. Quite a contrast to the usual mass-elevator-pitch that most conferences have become.

And now, somehow, I’ve got to do the event justice, both on behalf of myself and Dewars’. Like everybody else who attends, it’s not the event that matters, it’s what you take away and apply to your own life in a meaningful way that matters. I would be lying if I said I didn’t find it daunting.

I’ve said it before many times before on this blog: We are incredible beings living in incredible times, and as long as there is still one person alive on this planet who doesn’t believe this, then there’s still work to be done. TED re-affirmed this for me, in spades.

It’s four in the morning and I can’t sleep because of this. Thanks to TED for making this happen, thanks to Dewar’s for being such an awesome client.

5. This is only the beginning. You have my word. Rock on.

[Bonus Link:] The 23 Amazing TEDWomen Speakers Of TEDGlobal 2011. Yep. I met some of them. Yep. “Amazing” would be about right…

This is VERY exciting: Check out the animation video and cartoon work we did for CREDscore, by Movenbank. As somebody who spent a lot of …

This was fun: Last week we all attended TEDx Miami. It was held at the shiny new Frank Ghery designed, New World Symphony building, just …