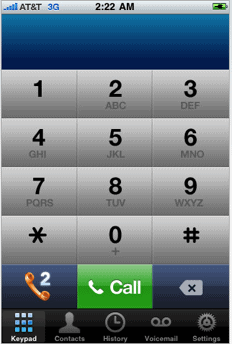 gapingvoid has landed itself a new client. Line2, the new VoIP app from Toktumi. Hurrah!

To find out more about them, Techcrunch wrote a really good piece about them last year.

, a startup that lets small businesses build office-caliber phone systems with their mobile phones and computers, just had its application Line2

approved by Apple — nearly three months after it was originally submitted. The powerful service allows business employees to assign two phone numbers to their iPhone: one that they can give to family and friends, and another that can be given to business contacts, with features that allow for call filtering and a professional-grade voicemail system. But it’s also notable for its many similarities to Google Voice, an application that Apple has kept out of the App Store for months now.

“The story so far: late last July, Apple abruptly pulled all third party Google Voice applications from the App Store, explaining that they somehow were duplicating the iPhone’s native functionality. Later that day, we broke the news that Google’s official Google Voice client had been barred from the App Store, sparking a media storm and a FCC inquiry into Apple’s rationale for the ban.”

It’s basically a second line for your phone- your iPhone, in particular.

I’ve never been much of a VoIP geek, so why did I get involved?

It was a simple little factoid that got my interest:

The Line2 service costs $14.95 per month. Not a huge amount, but costly enough when you consider that Google Voice is free. Line2 has a first month trial offer, which allows you to try it out for free. After that, they start charging. Fair enough.

So how many people start signing on at $14.95, once their free trial expires? Five percent? Ten percent? That’s what I was guessing…

Thirty percent! I thought that was huge. They must be doing something right etc.

The second reason is purely intellectual. As many bloggers have been spouting on for a while now (including me), we are in the early days of the largest communication revolution in the history of the planet. VOIP is in the forefront of this revolution, so getting involved should give me a front row seat. And we cartoonists need interesting stuff to keep our brains occupied etc.

I have no idea where this is going; I’m just along for the ride. Hopefully a Smarter Conversation will come out of it in the end. Watch this space. Rock on.

[Bonus link: Last March, Mashable did a good piece on Line2 as well, including the video interview above.]