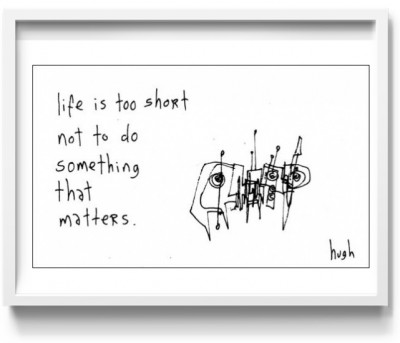 I first started playing with the idea of “Smarter-Conversations” way back in 2004, the same year gapingvoid really started getting traction in the blogopsphere.

Though not something I talk about day-in-day-out, it’s always been there somewhere in the background, informing everything I work on. Here are some notes:

1. In the seminal book, “The Cluetrain Manifesto”, the great Doc Searls famously declared, “Markets are conversations”. If you buy that premise (and I do, wholeheartedly), then quod erat demonstratum, if you want your marketing to be smarter (i.e. more effective), you need to be having a “Smarter Conversation”.

2. “Conversation” is a metaphor. Making your product sleek, elegant and graceful while all your other competitors make their product look cheap, plastic and clunky is a smarter conversation. Not all conversations need words.

3. It’s not just what you say, its how you say it. Calling it the “iPod” is a smarter conversation than say, the “MZT-2300-B Electronic Portable MP3 Digital Hand Device”.

4. Smarter Conversations scale. That’s what I really like about it. Anyone can have a smarter conversation- from a mom n’ pop pizza joint to a Fortune 500 company. It can happen in a Superbowl ad or on printed on the back of a paper napkin. You can start one on a blog today, for free. Or on Twitter or Facebook. The tools don’t necessarily have to change, the way you talk to people has to change.

5. Deciding to have a smarter conversation isn’t a business decision, it’s a moral decision. Like I said in the last point, the barriers to entry are zero. While your competition treats their customers like idiots, you treat your customers like intelligent human beings. You don’t do that because your accountant told you to, you do that because that’s who you are.

6. The Smarter Conversation’s value comes from, I believe, not by yet more increased business efficiencies, but by its humanity. For example, take two well-known airlines. They both perform a useful service. They both deliver value. They both cost about the same to fly to New York or Hong Kong. Both have nice Boeings and Airbuses. Both serve peanuts and drinks. Both serve “airline food”. Both use the same airports. But one airline has friendly people working for them, the other airline has surly people working for them. One airline has a sense of fun and adventure about it, one has a tired, jaded business-commuter vibe about it. Guess which one takes the human dimension of their business more seriously than the other? Guess which one still will be around in twenty years? Guess which one will lose billions of dollars worth of shareholder value over the next twenty years? What parallels do you see in your own industry? In your own company?

7. If Smarter Conversations work, it’s because they help humanize the company. I wrote about this years ago in an article I called “The Porous Membrane”. To paraphrase: Ideally, you want the conversation between customers [the external market] to be as identical as the conversation between yourselves [the internal market]. The things that your customer is passionate about, you should also be passionate about. This we call “alignment”. A good example would be Apple. The people at Apple think the iPod is cool, and so do their customers. They are aligned. When you are no longer aligned with your customers is when the company starts getting into trouble. When you start saying your gizmo is great and your customers are telling everybody it sucks, then you have serious misalignment. So how do you keep misalignment from happening? The answer lies the cultural membrane that separates you from them. The more porous the membrane, the easier it is for conversations between you and them, the internal and external, to happen. The easier for the conversations on both sides to adjust to the other, to become like the other. And nothing pokes holes in the membrane better than blogging.

9. Social Media allows you to cheaply and quickly begin a smarter conversation. And once you get it going, that conversation starts bleeding out into all other areas of your business- including advertising, PR and corporate communications.

10. Ask not what tools you want to use, ask how you want to change how you talk to people. All evolutions in marketing are evolutions in language. Those who can raise the level of conversation in any market, win.

11. Start today. It’s never too late to begin a Smarter Conversation. Like I said, money or time is not the issue. Making the decision is the issue, and only you can do that.

I just purchased your book in audiobook form (which I listen to at work)(and I paid full price, I did, right off a Borders Books shelf); it was only two hours long compared to a novel’s 10-20, but I figured the topic was worth the price.

On first listen it seemed like only street smarts due to the informal way the narrator presented it; but on further listening many deep and learned thoughts broke through- I don’t know if they were original or learned, but you offered several new ways of looking at things for me.

We agree on all the topics concerning creativity, though in slightly different words and nuances.

Your doodle-commentaries are interesting (makes me want to open Paint and fill them in with colors).

I came by to get a copy of your happy smiley-face dreaming of being miserable (to fit a poem I just wrote on an informal writing site on the topic). I want to give you credit, and that will be my minuscule contribution to your fame. Whoopie! [throws confetti] [and there is a lot of that on the writing site].

My career is still in what you’d call the early stages- it has been for about… hmmm… 30 years now… like you said, I’m enjoying my obscure (pure) creative freedom- I can go wherever my muse takes me…

and on your topic today- what you are talking about is style, fashion, and mass-appeal (which requires a lot of dumbing-down). In my creative endeavors it is better to ponder these issues as reflection rather than a plan, for in planning I would likely over-focus, with superficial and gratuitous results; so for me it will be better to ask, “In what degree was I?” rather than “How will I?”

One of the first things I remember learning in advertising is ‘write like you talk.’ Or, perhaps more appropriate, ‘write like they talk.’ Why? Because when we craft messages that attempt to engage in the vernacular of the target audience, it – creates a mental conversation. Thanks for the reminder Hugh.

it is ironic — all of these social media portals allow us to communicate and interact so easily and quickly — yet they also seem to be de-humanizng our communication. thank you for your comments. the human element is what really gives a conversation content and meaning.

I think that cascading effect of a good conversation is what the best social media experience offers. One person’s contribution sparks a thought in someone that adds to the debate, then someone else chimes in, and you’re watching something emerge before your eyes.

🙂 Wilson Cellular surprised the bajeebers out of me when I posted a random photo of my cell signal booster to Twitter. I did not mention Wilson Cellular in text. http://twitpic.com/28urtl.

They didn’t come back and say “thanks for the promo” … no they asked me which equipment I was using. Sooo … me being me … I posted this: http://twitpic.com/28wmge

Then … for their further amusement I posted this: http://twitpic.com/28wp6h Why? Because this little jewel has made some really fun adventures happen. And it’s been fun! Lots of fun!

When they came back in a totally conversational manner that I had made their day, I added that sometimes instead of the frying pan, I use the toaster oven. I won their hearts and a surprise RT of the day award.

And of course we follow each other to this day. And I RT them as often as I have reason.

I have had a Twitter account for sometime. Never used it. Gradually started using it. Just learning about autofollow bots.

In the next few days following the Wilson Cellular encounter, I mentioned audio books in my Twitters. I had two audio book companies start following me. One was Audible.

I felt that at least Audible should have known to engage even just a little bit. In comparison to @WilsonCellular, their follow felt like a creepy silent stalker.

I admire @WilsonCellular. They may not be completely Twitter savvy http://twitter.com/Wilsoncellular/status/22894770674, but they are completely human.

Hey,
I think it’s funny that you mention Apple in #7, being as they are probably the one company that is talking the less with its customers.
They’re brillant at talking at their customers, though. 🙂

Sylvain, are you kidding me? Apple are GREAT at “talking” to their customers.

They just happen to prefer using products, instead of words…

“Conversation is a metaphor”. Pay more attention next time 😉

Hi Hugh,
I am great fan of you and your cartoons.

I am a 9 year old kid and want to interview you to share your story on my blog.

I wish more PR companies that contacted my blog had a clue what they were talking about! Maybe they need to read this article it might point them in the right direction.

smarter conversations: “how do i want to change the way i talk to people?” RT @gapingvoid | Social Tribes