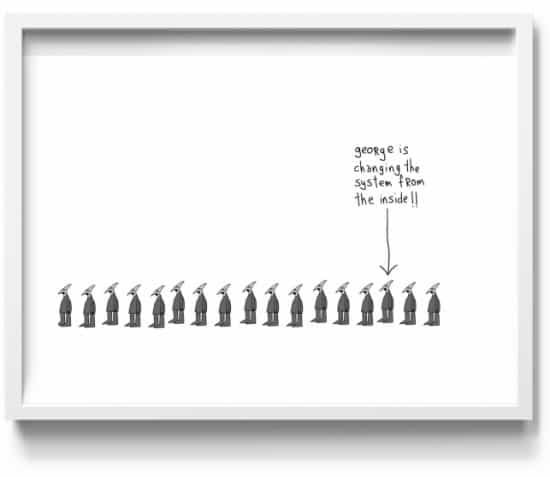 [“George”, which I sent out in the newsletter recently. You can get the signed print here etc.]

I was thinking back to “The Golden Age of Blogging”, whenever that was. Say, six or seven years ago… when it hit that sweet spot between still feeling like virgin territory, yet just on the verge of reaching critical mass.

Back then the Blogosphere was TINY. We blog nerds were a minority. We were cultural weirdos. But we knew we were on to something, even if the rest of the world didn’t see it yet.

And we were looking VERY HARD for business models to support our new, beloved medium…

I remember when a guy landing a well-paying job just on the merits of his blog, was considered big news.

I remember when a girl landing a book deal just from her blog, was considered big news.

I remember when Robert Scoble blogging on behalf of Microsoft was considered big news.

I remember when Gawker or Techcrunch making $10K a month on advertising, was considered big news.

A blogger making good money selling art- Well, that’s what I do now for a living– back then that would have been considered HUGE. Now we take that kind of thing for granted. Book deals, $10K monthly advertising revenues, dream jobs, celebrity Microsoft bloggers, nowadays that’s no big deal, either.

I remember when blogs first became “News”, when that Businessweek story hit in early 2005. It was a very exciting, validating, heady time for us early-adoptors.

Eventually the buzz and the hype died down, of course. Along came Twitter, Facebook, MySpace and whatever; the story moved on. “Blogging” got boring….

But to paraphrase Clay Shirky, a technology doesn’t become truly useful until it becomes boring, until it’s no longer “News”.

We may miss those early days, when blogging was new, exciting and “Hot”.

But for me and a lot of my early-adoptor friends, our blogs are making us A LOT more money now, than they ever did then.

Yip-a-dang-doo for you and your early adapter friends.

Exactly, Jill. Those days were a blast.

These days are, too 😉

Well, I agree boring is underrated. After a particularly “interesting” period in my life, I changed my computer admin password to “Iliketheboringlife” — but recently had to change it again, craving excitement.

(And I agree that making money is good and that artists have unprecedented opportunity now to do so on their own.)

I’m also enjoying seeing you play around with the business model part of your blog – the daily cartoons you send out are great, not just because they’re great but because it’s a business-savvy thing to be doing too.

Hugh- I’m a fan. A big NEW fan. I RT and put you on my blog. I’m listening. My blog is my new baby love. So- it’s all sorta old news for you….but I’m still in the newbie stage. And loving it. Thanks for all the great great stuff.

Been blogging since 2001, so by this definition I was an early adopter.

Of course, I never realised this at the time, although I’m sure I recall getting a reply from Evan Williams when I emailed blogger about some technical problem or other. I gather this does not happen any more.

Or is a deliberate distinction being made here between early adopter and early adapters?

I love it when a title and a last sentence are the same. don’t need to read the piece.

… like it. blogs are a great medium for expression in my opinion.

[…] February 28, 2010 · Leave a Comment I’ve had two things open in my browser all day while I’ve been finishing off that policy paper: a review of The Age of Absurdity and Hugh Macleod’s ‘boring’ is underrated comic/post. […]

Yes, boring is underrated in many ways.
Boring (or do something else that is fun) could be the lizard brain getting you in trouble to ship.
There are some “borings” that when you manage to make them, they will end up being just a little price to greater “funs”.

Was using this go to a random blog feature on randomizer and ended up here, a great way to read something new like this. Thanks for taking your time and efforts to write this blogpost.

It works quite well for me