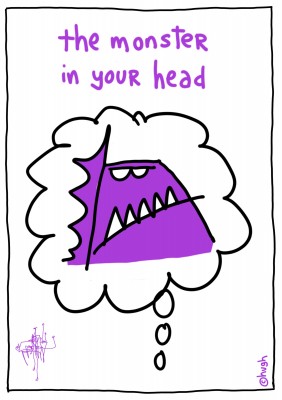 Jerry Colonna used to be a Ven­ture Capi­ta­list. He was EXTREMELY suc­cess­ful as a part­ner with Fred Wil­son at Fla­ti­ron Part­ners. Before that, he was an invest­ment ban­ker on Wall Street.

Then he deci­ded he wan­ted out of the busi­ness. He had made his money, he now wan­ted to give back. He wan­ted to teach.

After teaching busi­ness clas­ses at CUNY in New York for a little while, he set him­self up as a busi­ness coach. A damn good one.

“A bit like being a shrink,” he told me, “but more business-focused.”

A big part of his modus ope­randi is not telling peo­ple what to do with their busi­nes­ses, but trying to get them over their fears of achi­eving that which they MUST do, if they want to become the peo­ple they one day hope to be.

“The issues my clients fear the most tend not to be the actual stuff out there– com­pe­ti­tion, cash­flow, mar­ke­ting,” he says, “but the worst-case ima­gi­nary sce­na­rios. ‘The Mons­ter Inside Their Heads’, as it were. So a cen­tral tenet to what I do is hel­ping them to get over The Monster.”

So he com­mis­sio­ned me to draw a Monster-themed “Cube Gre­nade”, as a sig­ned, fine-art print to give away as pre­sents to his best cus­to­mers and allies. Something to keep on the office wall as a cons­tant reminder.

I was glad to do it. I’ve always got my fair share of Mons­ters, myself. Rock on.