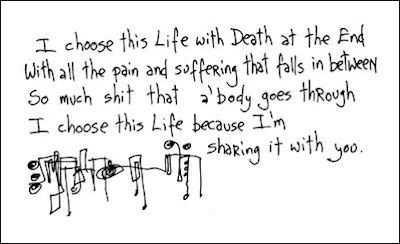 You were given a gift by The Creator, God, The Universe, Whatever. Until you have returned the favor, Life will have a certain, feckless emptiness to it.

So sooner or later you’re going to have to explain to your friends and family EXACTLY why you decided to quit your stable 401K job and go off on some long-term ACT OF LUNACY i.e. your EVIL PLAN.

Yes, you have already learned how to make a living and pay the bills…

But you know that’s not enough.

I’ve had my fair share of crappy jobs, as have we all.

You know what? I never hated a job because of what it took from me- ALL jobs take a lot from you, especially the best ones.

I hated a job because it never allowed me to give enough to the world..

That’s all I ever wanted: My best self, playing my best game. Being an advertising hack never allowed that, somehow. But I can now do that as a cartoonist. I’m damn lucky to have found that out, even if it did take me a painfully, embarrassingly long time.

I’m not the world’s most talented person at what I do. Neither are you. That doesn’t make the gift we have to give less valid.

Giving the gift is an act of love. And Love is the only thing that matters.

That’s why we have an EVIL PLAN. Because it matters. Because Love matters.

What else is there to say…?

[About Hugh. Car­toon Archive. Sign up for my “Daily Car­toon” News­let­ter.]