[YouTube video homepage here…]
[N.B. Yes, I’m planning on selling this one eventually. Please feel free to e-mail me if you’re interested, Thanks!]
PHASE ONE OF THREE: THE UNDERCOAT. Sunday, August 30th. 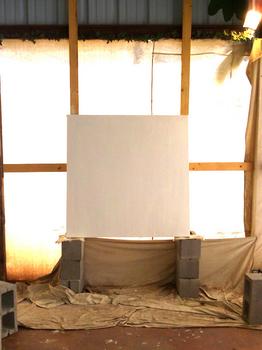 [“Marfa One”, which I started this weekend.. Click on image to enlarge etc.]
A blank canvas (see above) that I finished doing the white acrylic undercoat for, earlier today. Four-foot-by-four foot. Titled “Marfa One”, it’s will be the first of The Marfa Series.
Now to get cracking on the pencil… 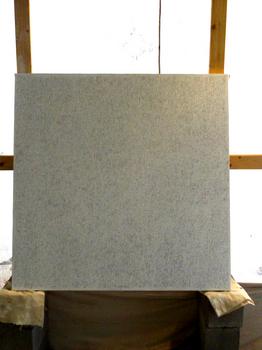 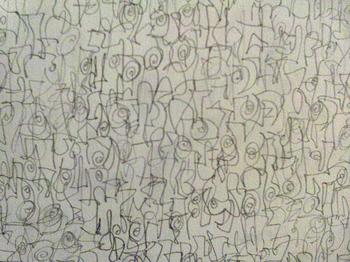 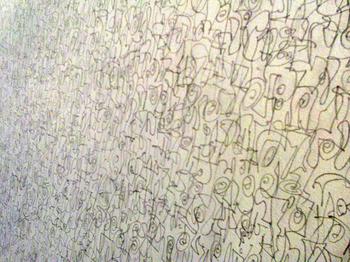 [Close-up. Taken from the side etc.]
Yesterday (Sunday) I cranked out the pencil. Took forever, but it was worth it. Besides some very small touch-ups at the end, I did it all in one session. No messing around.
I got myself in a mind-set that, although it’s large and on canvas, it didn’t intimidate me. I just treated that four-by-four-foot, two-dimensional surface like any other drawing, like any other page in my sketchbook. I didn’t treat it like “ART!!!!”. I just did my thing and got on with it; not a lot of fuss.
I think that’s how I’ll approach all my big pieces from now on…
PHASE THREE OF THREE: THE INK.
[Update: 24 hours later, Tuesday, September 1st, 2009.] 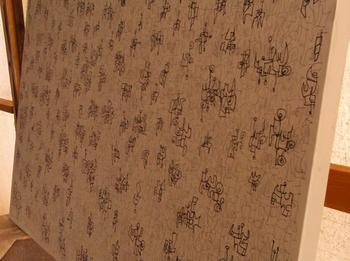 [Click on image to enlarge etc.]
Made a good start yesterday on the inking. Hope to finish it by tonight etc.
This is always the hardest part of making a big drawing. The temptation to “rush it” gets more and more overwhelming, the closer you get to the finish line. But last-minute rushing can easily ruin it. Oh well, I’ve been here many times before, nothing I can’t handle etc.
[Update: 24 hours later, Wednesday, September 2nd, 2009.] 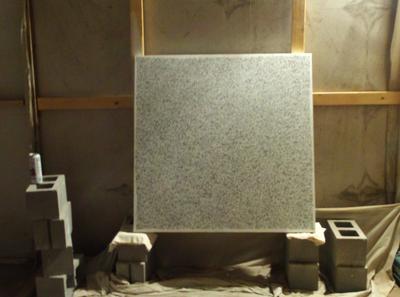 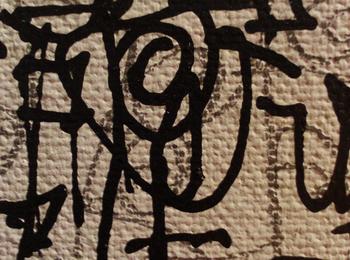 Got up this morning at 4am and put the finishing touches on Marfa One.
It’s done…

Who Are The Happiest Artists? When I was ten years old, I was having a nice chat with my mother about what I should be …