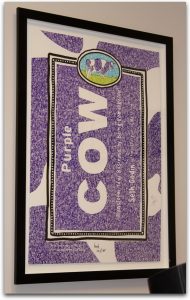 [The Purple Cow Print. Click on image to enlarge etc.]

For those of you still in the dark re. The Purple Cow Print that I worked on with Seth Godin, one of the greatest marketing thinkers in the world, this is just a note to say I’ve set up an archive of all the blog posts about it. Seth blogs about it here as well…

And of course, it’s for sale on gapingvoidart.com.

The other bit of news is, Seth and I will be throwing an official launch party for the print in New York City on the evening of October 8th, 2009. A chance for friends of both gapingvoid and Seth to hang out and meet n’ greet. A bit belated, maybe, but we both had very busy summers.
We’re throwing the party in a Lebanese restaurant in Chelsea, I’ll also have some of my other works on display- both prints AND original drawings. And yes, they’ll be for sale. So it’ll be a bit like an art opening, with perhaps more emphasis than usual on the people attending [not to mention, food and drink], than the actual art itself. Stormhoek, naturally, will be supplying the wine.
Details to follow shortly. Watch this space etc.
Anyway, I hope if you’re in the area, you’ll be able to make it. Thanks.
[NOTE TO SELF: What a crazy adventure this has all been so far…]

Hey Hugh,
Saw your tweet about coming to nyc. Look forward to seeing you guys. jim

I would love to be there and most of all to shake your two hands guy. Very difficult but not impossibile.
Greetings from Italy.
Bye, Fil.

Damn. I’ll be in Afrika.

Please invite me! Looking forward to seeing you again.

Would love to be there. please send deets. i think both of you are the cat’s pajamas!

Will be making the trek from Utah’s Rocky Mountains. Looking forward to it.

Reduce overwhelm, expand your reach and have more fun with partnerships | Escape From Cubicle Nation

Would be great to see you there, Max! You’ve always been one of the god guys, IMHO.

thx for this one m8