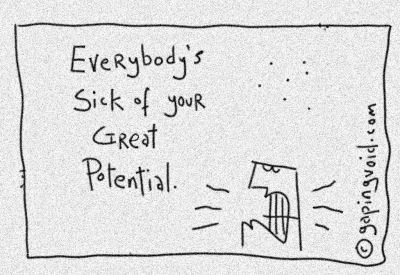 Boing Boing is one of my favorite blogs. It’s also one of the most widely-read blogs in the world, and deservedly so.
So why is it so popular? The most obvious answer, “Great Content” is a no-brainer. Of course it has great content. People wouldn’t read it if it didn’t.
But “Great Content” is only half the story. The other half is just as important, though a little more subtle. And what is that?
Short Answer: “Sociality”.
It’s not just that Boing Boing’s content is fun to READ. It is. It’s also that Boing Boing’s content is fun to SHARE.
“Wow. What a cool article. I think I’ll email it along to my friends at work. Better yet, I think I’ll mention it to my hundreds of Twitter followers. Hell, I’ll even blog about it…”
Boing Boing has a lot of “Sociality” baked-in, i.e. its content makes for great “Social Objects” i.e. their blog posts are great “Sharing Devices”.
We are primates. We are social creatures. We like to socialize. And we socialize around objects. Boing Boing cranks out “social objects” by the ton, that we can effortlessly pass along to our friends.
And that’s where the true value of Boing Boing lies. Will sending your friend, Bob a link to this cool post about Detroit photographers permanently change his life for the better? Probably not.
But giving you something that allows you and Bob to socialize with each other [“Cool post, Dude!!!”] digs deep into what really matters to us primates: Socializing i.e. Sharing ourselves with our fellow species.
And what’s true for blogs like Boing Boing is true for any other product. It’s not what the product does that matters to us so much, it’s how we socialize around it that matters. This is why the iPhone is so successful. Sure, we like having all those cool apps, but being able to talk about and recommend cool apps to our friends [“Cool app as social object”, Exactly!], that’s what we are genetically hardwired to like even more.
Read Mark Earls if you don’t believe me…
[N.B. I didn’t coin the term “Social Object”; it was an idea I was turned onto by the brilliant Jyri Engstrom. Here’s a great video of Jyri speaking about social objects in 2008.]

this information is really useful to me, thank u

What a great insight. Reading your post prompted one of those little “a-ha!” moments that remind me how much fun learning can be.
As an iPhone junkie, I especially appreciate that reference and can unabashedly relate to the truth that half the fun of having an iPhone is chatting with other addicts about all the great apps I’ve “discovered.” I have started spontaneous iPhone conversations with waiters, random coffee house patrons, people on the street, playground moms, and other complete strangers. My favorite encounters are with iPhone newbies who are delighted to have the input of a more “seasoned” addict. 😉
Business may be business, but humans are – as you point out – “social creatures.” In personal and business relationships, it always behooves us to remember that fact and tailor our communications accordingly.
Thanks for the moment of clarity!

Hugh, we used to read (in those annoying books about how men and women are different) that males bond over objects and females over “secrets” or basically communication. I wonder if anyone’s done a study in social networking stats, by gender, of link sending/posting? Thanks for the BoingBoing links – I’d not been there – go figure.

The internet lets the crowd raise-up the things it likes with links and tags and re-posts, and damn the things it doesn’t like with a pointed lack of attention. Old passive message, big idea, objective correlative creative with a big call to action, and series of key frame proof points doesn’t cut it anymore. There is too much noise: now things have to be good enough to share.
But just because something is good enough to share and inherently interesting doesn’t mean it will catch on and spread through the network. The work that is interesting must be structured for the network, as demonstrated by SharedEgg. That is the nature of successful Social Objects or the ideas that use them.
Work/Ideas must allow the crowd to create nodal points within their part of the network. A Nodal point is a (potentially distributed) collection of content, conversations and links that spread a meme/concept and cause the ideas and journeys around it to be reshaped and dragged just like a planet’s mass influences the passage of time around it. It is a key point in the narrative of the net.
Anything we create must also contain an idea that can be reprocessed and played with, passed on and owned.
This gives us two key challenges, one commercial and one sociological: (1) how do we make things that are good enough to share, and good enough to create or contribute to nodal points; and (2) how do we use creative to help shape the network so that the nodal points it throws up in the future are useful and “the best for society”?

Well said – I had not considered the aspect of sociality before! You are correct that great content alone does not create a great blog. I believe that great content is the foundation and the social experience (sharing) is what propels the bog to greater heights.

Your take on Boing Boing is right in line with mine. I agree that the reason they are so popular is because their content is the kind of stuff that people want to share with their friends. This generates the kind of natural linking that all bloggers want for their blogs.

Just came across this and love the conceptual framework. With the social web driving so much more business today, the concept of measuring your marketing’s potential as “social objects” is a powerful. More businesspeople, especially in stodgy, old-line industries (e.g. automobiles or copiers 😉 need to grasp this simple, but elegant idea if they want to propel their marketing from the “as-is” to the “needs-to-be” in a timely manner.