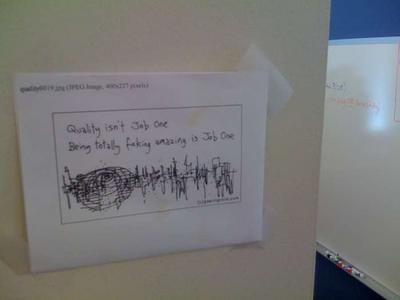 [Update: Essential Reading- “Work With Hugh: Everything You Always Wanted To Know About “Cube Grenades’ But Were Afraid To Ask.”]

Above is a photo that one of my friends on Twitter sent me. He basically downloaded one of my cartoons off my blog, printed it out, and stuck it outside his cube at work, for other people to see, hopefully to comment on, and hopefully, to start a conversation.
This, I believe, is where my cartoons work the best- “Cube Grenades”- small objects that you “throw” in there in order to cause some damage- to start a conversation, to spread an idea etc.

[The Blue Monster]
The Microsoft Blue Monster is probably my best-known Cube Grenade, which is why I made it into a limited edition print eventually. 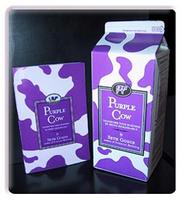 Seth Godin first put his Purple Cow book into a purple milk carton for the same reason- he guessed [quite rightly, as it turned out] that people would see the carton on somebody’s desk, inquire about it, and a conversation about the marketing ideas contained in the book would be started.

[The Purple Cow print]
And the Purple Cow print was designed the same way. OK, it might be a bit big to display in a cube- you need a lot of wall space for this one- but the idea is the same- Conversations that happen around the object are more interesting than the actual object itself.
“Cube Grenades”. Exactly. Cartoons designed to affect change as “Social Objects”. Exactly.
[Check out some of my limited edition prints over at gapingvoidart.com.]

Since I posted this “Cube Grenades” idea yesterday, I’ve been giving it A LOT of thought. Here are some notes: 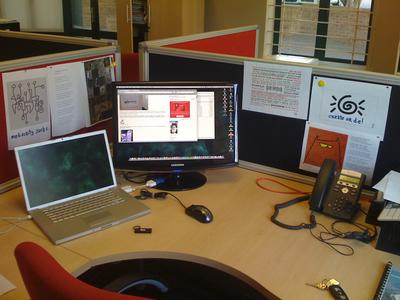 [More “Cube Grenades” in action. Click on image to enlarge etc.]
1. Like I said, my cartoons work best when they’re used as “Cube Grenades” i.e. small objects that you “throw” in there in order to cause some damage- to start a conversation, to spread an idea etc. But other social objects can be used as well- purple milk cartons, homemade cookies, funky mousepads, rubber toys, newspaper clippings etc. It’s the people that matter, not the object they socialize around. I don’t claim to have a monopoly.
2. Repeat After Me: Cube Grenades are Social Objects. Cube Grenades are Social Objects. Cube Grenades are Social Objects…
3. All big change in companies come from the people in the trenches, who do the actual day-to-day work. To change their behavior, you have to change the way they interact. People interact around social objects. Change the social objects, and you change the company.
4. My friend, Mark Earls once told me a story about a friend of his. The friend played a key role in the massively successful corporate turnaround recently undertaken by McDonald’s.
His friend told him, “We knew we were screwed, NOT when the nutrition and green issues started hitting the newspapers, but by the simple fact that our staff on the floor just weren’t cleaning the tables and the bathrooms like they used to. We knew THEN that our people had lost faith in our company.”
What social objects were people using, both during the company’s decline and during its turnaround? What cube grenades were being thrown about, both before and after? I bet you they weren’t the same.
5. Yes, I am fully aware that your customers are paying for the quality of the products and services your business provides, not for the quality of the cube grenades flying around your corporate headquarters. But they are all related. Everything of value that your business creates is the product of a already-existing social dynamic. Businesses are people, not machines. And people socialize around objects.
6. An Open Letter to Ad Agencies: Guys, you are NOT selling messages anymore. You are selling social objects. The work that you create will affect the cube grenades and social objects, that your clients and their customers use to interact with each other. 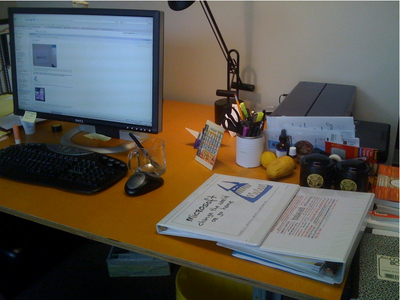 [More Cube Grenades. “I use them as covers for my binders strewn about my desk, to start conversations”, says the person who e-mailed me the photo. Click on image to enlarge etc.]
7. You see a guy walking out of an Apple store, looking all excited about his new Apple computer he’s carrying under his arm? Why is he so excited? Sure, he just got himself a nice-looking piece of kit, but what REALLY excites him is all of the COOL, DISRUPTIVE STUFF he’s going to MAKE with his new machine. Videos, music mixes, whatever. For his FRIENDS and his PEERS. Again, it’s the SOCIAL that makes it interesting. Apple makes cube grenades, just like the ad agencies. Just like you do.
8. People download my cartoons and stuck them on their walls by the THOUSANDS. A much smaller number spend money to buy the more expensive versions i.e. my prints. But the idea is the same i.e. a way for people to interact. As I’m fond of saying: The conversations AROUND the object are FAR more interesting than the object itself. And what is true for me is true of your product, as well. “People Matter. Objects don’t.” Exactly.
9. So when do I start charging? You can download my stuff for free, so why should you buy a print? Who says you should? I’m guessing that if one of my cartoons is meaningful enough to you, you’ll get tired of seeing it printed on the office laserprinter paper in low-resolution, getting all worn and torn, with the Scotch tape getting all yellow and crinkly. If you like the drawing enough, eventually you’ll want to upgrade. The same way, back in college, that I would upgrade to vinyl or CDs, once the cheap and nasty cassette tape of my favorite band started getting all fuzzy and worn out. The same way I gladly paid $20 to hear the band play live, rather than hear the same songs on the cassette. “Meaning Scales”. The more cube grenades I throw out there, the more meaningful interaction I create for other people, the more people will want to pay for it eventually. If I locked it all down as a cash-only transaction, it would all die a horrible death overnight. 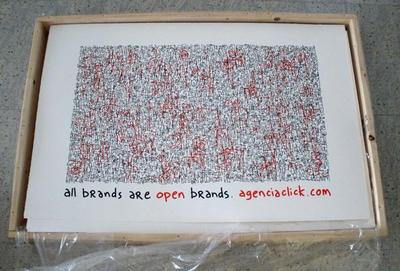 [Privately-commissioned “Cube Grenades” i.e. limited edition, fine art prints that I did for my Brazilian client, agenciaclick. Click on image to enlarge etc.]
10. Probably the job I’m most proud of recently, is when I was hired by a Brazilian ad agency, agenciaclick to create a privately commissioned edition of cube grenades i.e. fine art prints. See photo above.
They didn’t want these prints for themselves; they wanted to give these out to their clients, as conversation starters.
“All brands are open brands? Huh? What does that mean? Do you agree with it? Why? What does “open” actually mean? What does “brand” actually mean…?” You get the picture. The same idea that made The Blue Monster so successful. Again, it wasn’t about the message, the object. It was all about the social.

11. My long-term goal is to make more privately-commissioned “Cube Grenades” for more clients like agenciaclick. It was a wonderful working experience for me, and I want to spend more time in that business. If you find this idea interesting, please feel free to e-mail me at [email protected]. Thanks.

To keep everything on the same page, I copied & pasted the entire “Ad Agency Pitch” from May 30th below. Thanks. 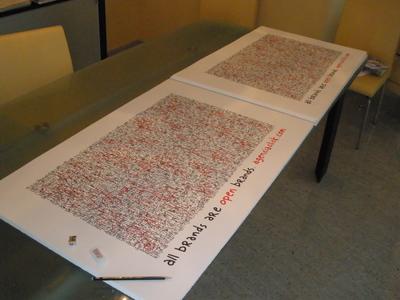 [Signing the agenciaclick cube grenade a couple of weeks ago…]
Over the last couple of weeks I’ve been talking with various advertising and PR folk about the Cube Grenade idea. Here are some notes:
1. In terms of the advertising and PR industries, the Cube Grenade is basically conceived as a relatively cheap and effective Social Object to articulate the Purpose-Idea of a brand or company.
2. If the agency has an idea they REALLY want to sell to their client, they might have better luck if they first articulate the idea via a Cube Grenade designed by me, rather than the traditional “agency pitch” model. The agency’s idea is somehow articulated as a commissioned print, the print is given out as a gift, to people within the relevant constituency. The print hangs on a wall, other people see it, and if the idea is any good then people will start talking about it. That conversation will lead to other conversations. If the idea is any good, other ideas [and opportunities] will be spawned from it.
3. The Cube Grenade is not a glorified advertising poster. I’m not primarily interested in why people should buy the client’s product per se. I’m far more interested in the human dynamic, the collective human drive that makes the client’s people want to get up in the morning and go to work. That is where THE REAL VALUE is created.
4. Because the Cube Grenade is given as a gift- an act of love, as it were- AND NOT A DELIVERABLE WANTING TO BE SOLD, it will break through the cultural barriers of the client company a lot more cheaply and quickly than your standard “Big Advertising Idea”. The game here is not about “Selling An Ad”, the point is to make the client more alive, more human, more aware of their own human potential. Again, this is where is where THE REAL VALUE for the client-agency relationship is created.
5. Whether the Cube Grenade “works” or not in the end, both agency and client will find out if the thought behind it works A LOT sooner and inexpensively than executing your average ad campaign. Like all communication, the idea needs to RISK FAILURE if it’s ever to be any good. “Fail cheap, fail often”, as the great venture capitalist, Esther Dyson likes to say.
6. As I’ve said before to the ad agencies: “Guys, you are NOT selling messages anymore. You are selling Social Objects. The work that you create will affect the Cube Grenades and Social Objects, that your clients and their customers use to interact with each other.” This is why I’m talking to advertising folk. At the end of the day, we’re both in the same business.
7. To get more background reading, please visit my Cube Grenade archive here. You might also want to check out “The Hughtrain” to get a better understanding of where my ideas are coming from.
8. As always, if this idea is of any interest to you, please feel free to contact me at [email protected]. Or if you know someone in the advertising industry, please send them along to this page [Here’s the link]. Thanks!