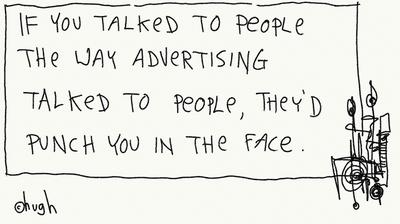 From my recent ‘Ten Questions’ with Mark Earls:

7. In “Creative Age”, you destroyed a very sacred cow of the agency world, The Brand. With your second book, “Herd”, you successfully went after an equally massive agency sacred cow: The Idea of Consumer as “Heroic Individual” [Embodied by cultural icons like The Marlboro Man, or the existential athlete wearing Nike’s]. Your message seemed to be, actually guys, we’re social animals. We’re social primates; we behave more like chimps and gorillas, more than we behave like lone, cigarette-smoking cowboys. Care to explain the idea further?
[Mark’s Answer:] Again to simplify: Human beings are to independent action, what cats are to swimming. We can do it if we really have to, but mostly we don’t… Instead, we do what we do because of what those around us are doing (Whatever our minds and our cultures tell us).
So if you want to change what I’m doing, don’t try to persuade me- don’t try to make me- do anything. Instead, enlist the help of my friends…
But not crudely (as in “Recommendation”). That’s just persuasion by another name: another “Push” tactic. I’m convinced the answer lies in creating “Pull” (i.e. Social) forces.

When I wrote that question for Mark, I’d been thinking a lot about the “Heroic, Lone Individual” schtick in mass media, particularly with mass marketing.
Most mass-market messages are consumed alone. Most of the ones we see are so unremarkable- think of a late-night TV commercial for a local car dealer, for example- they’re not Social Objects, they don’t warrant us doing the social, they don’t warrant us sharing them with people. Sure, we can gather in groups around the TV and be watching the same commercial, but the commercial is not genuinely addressing us as a group. It’s trying trying to pick us off, one by one.
Ergo, the world of mass marketing is basically a lonely place. Which makes the Marlboro Man– think riding the range with no other people for miles around- or the existential athlete- think Tiger Woods, about to make the amazing putt- the perfect citizen for it.
Then along comes the internet. Along comes interactive. Along comes “sharing”. Along comes media that actually creates real social behavior, as opposed to just trying to create idealized, theatrical versions of it..
Suddenly Mr. Lonesome Heroic seems a bit out of place.

The power used to be advertising, thus ordering and commanding and paying invoices.
Now the power is changing into social media, which requires effort and intelligence. Things money can’t really buy.
After 200 years of advertising in mass media (newspapers – first in 1702 in UK), the change is imminent and very disruptive.
How will the Proctor & Gambles’ going to handle this? As small companies can challenges the Goliaths with content that generates interest and additional communications almost for free.

That cartoon (“If you talked to people the way advertising talked to people, they’d punch you in the face”) has resonated with me so much that I’ve been thinking and saying it since the first time I saw it, and probably half-forgot the source.
Multiply that by ten when it’s an automated pre-recorded telemarketing call, and I’ve just wasted my breath on a sincere “hello”.

So deep. So powerful an idea, Hugh.
I remember the day, when I emerged from decades of watching infomercials on TV alone late at night, and realizing that everyone else had been doing the same. How did I find that out? The internet.
I was shocked, shocked I tell you, to discover that millions of other people could quote “going to see” Cal Worthington or the cadence of the Chia Pet tv ad copy, not to mention, falling and not being able to “get up”! I thought that only I was loon enough to watch that crap! Who else would? Everyone, as it was all that was available to connect with at that time. Alone together.
So, now that we know we are all together here, what can we do with it?

yeah you could sell me anything right now

Now that we are all together we can “burn” the billboards, repeatedly ignore/sabotage these messages, make adspend an irrelevance and claim back the environment, our mental real estate and maybe, just maybe, create a better future in which the Orwellian leanings & fiscal idiocy inherent in mass marketing, the tv industrial complex, imbalance of power and control doesn`t so readily feature…
Exxon Mobil, Clear Channel et al……it`s up to us to make these ideas a reality.

So, maybe Facebook ads should show how many of your friends also clicked through? Cross the interruption model with social pull?

And to think that I read “Herd” cover to cover. Of course! On a related note, I am working on some thinking around APE and cartoons, etc. Also surprised I had not looked at that as a viable media story before.

I still wonder whether practically every active form of marketing isn’t simply manipulating people (or trying to).

I think that there may be an added dimension which goes someway to explaining the Mr Lonesome heroic tactic, in that often we do what we do because of what those around us are doing it while rationalising to ourselves that we are Mr Lonesome Heroic and doing it for far better reasons than everyone else.

Very profound idea. I think what is also valuable to recognize is that a huge part of the reason why marketing is what it is today is because our economic and political DNA (two enormous factors that dictate our perceptions and realities) – which on many occasions – trumps the cultural context is wired to support the success of the “individual”. Not the (cultural) group. It is a strong argument that this country was built on “I” not “we”. This is the very idea that drives this country. Hence why marketing is as it is – as Mark Earls states. Daily we don’t operate consciously and/or deliberately thinking about we (even though that’s truly how we are engineered – i.e. the cat swimming analogy). We have separated business and how we as people actually live (depending one one another) for a long time now. Once we look seriously at aligning the two then I think even more significant crumbling of the Marlboro Man schema will continue to take place.

[…] it is! Personally, my best reminder to speak human is a drawing from Gapingvoid with the text: “If you talked to people the way advertising talked to people, they’d punch you in the f… – It’s as simple as […]