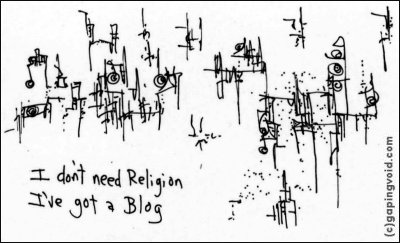 As the market for blog and Web 2.0 media keeps on maturing, I thought this gapingvoid post from August, 2006 was worth a revisit:

I get asked a lot about how many people read my blog.
I have no idea. Because the answer, of course, depends on what metric you use. What stat counter you use. Anything between x-thousand and x-thousand-times-ten visitors per day, depending on which robot you wish to believe.
I tend to believe the lower figures more than the higher ones, but hey, that’s just me.
But “How many people read your blog per day” is not the same thing as “How big is your audience.”
Let me explain.
The number of blogs I read on a daily basis numbers about a dozen. The number of blogs I read every couple of days numbers about ten times that figure.
But the number of blogs I read regularly, just not that often, is way, way, way higher than that. Many thousands of them.
Dave Weinberger is a good example. I like his blog, I like him, I value what he has to say, however for one reason or another I don’t read his blog that often. Maybe a couple of times a month. Maybe only once a month. It’s nothing personal, it’s like he said in a very entertaining post last year:

No, I’m not keeping up with your blog.
I would like to. I really would. I like it and I like you.
But we’re now well past the point where any of us can keep up with all the blogs worth reading from the people worth keeping up with. Even with an aggregator.
I just can’t do it any more.

So, although I don’t read his blog that often, he is on my radar, and I consider him somebody who continues to inform and influence my worldview. As a result, I consider myself very much part of his audience.
Another way to think about this is akin to a favorite rock band. You may not listen to their recordings every day, but pull out their music every so often, when your life needs a dose of their particular brand of inspiration. They might not be a daily fix, but they’re nonetheless a regular and important part of your life.
So following this logic, I’m guessing there are a lot of people who read me in the same manner that I read Weinberger. I may not be part of their daily fix, but they are part of my audience nonetheless.
If you accept this logic, then suddenly my audience starts looking much larger. And so do the audiences of many other bloggers.
It’s just a pity this metric isn’t one that advertisers find particularly useful, or else a lot more bloggers would be making money.
[Note To Self: I would be really interested to hear Stowe Boyd’s take on this.]

My take on this, one year later? I’ll have to concur with JP Rangaswami, who reminded me on Twitter that, “if ‘traffic’ is what you want, then more cartoons may mean more traffic. If you want connections and relationships, that’s harder.” I also concur with our mutual friend, Doc Searls, who doesn’t like describing the people who read his blog as his “readers” or “audience”. They’re not “eyeballs”, for heaven’s sake. They’re just people he knows. Life is short enough without imposing corporate metrics onto your friends etc etc. Sure, for convenience’s sake we’ll all use the words “audience”, “readers”, “traffic” etc. But they’re not words that do a particularly good job of getting to the meat of things.
[Update:] I describe blogs in the comments below: “A simple device to stay on people’s radar screens in a hopefully meaningful way.” It works for me etc.