[December, 2007 marks the 10-year anniversary of my “cartoons drawn on the back of business cards” format. Here’s some random notes on the subject, in no particular order:]
1. I came up with the format in early December, 1997 in Chicago. I moved to New York about a week and a half later. But the format didn’t really gel till I got to the East Coast, a couple of months later.
2. At last count I had done over 5,000 of them. That was over two years ago.
3. I never really experienced the “One Big Moment”, the Tipping Point etc. The schtick just built up slowly, day by day.
4. When people ask me what I do, I never say, “I’m a cartoonist”. But the other day a friend of mine made a compelling case for me to start doing so. Not sure what to think yet…
5. I never expected the cartoons to get successful.
6. The way most cartoonists make a living utterly horrifies me.
7. Constantly setting new goals, artistic or otherwise, is harder than it looks.
8. Not caring what other people think is harder than it looks. Especially AFTER you get successful.
9. As I get older the temptation to “tone it down” grows stronger every day. I’m glad I still can resist it, most of the time.
10. My favorite cartoonist for the last while has been David Shrigley, long since before he was hired by Hallam Foe to animate the title sequence. I first met him in Glasgow in the early 1990s. He’s a really lovely guy in person.
11. Musicians have always inspired me far more than other cartoonists, with perhaps the exception of Charles Schultz, Saul Steinberg, Ralph Steadman, Ronald Searle and Edward Gorey.
12. Instead of carrying a portfolio around, I just keep a couple of hundred images on my iPod. Seems to work well enough. Luckily my format is well suited to the device. 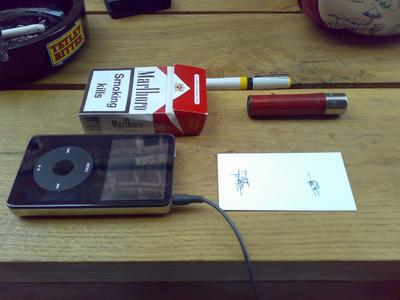 [All you need to start building an empire- drawing pen, blank business cards, iPod, smokes, lighter, and a local pub that serves a good pint. Click on image to enlarge etc.]
13. Everything I own would easily fit in the back of a small pickup truck. I’ve never been into possessions. The same was true for my late paternal grandfather, probably the most resonant influence in my life.
14. I find it very liberating to have a format that allows you to store a few years worth of work in a single shoebox.
15. If you offered me $10,000 for this cartoon, I’d probably turn you down.
16. One of the smartest moves I ever made was to figure out that making money indirectly off the cartoons was far easier than trying to make the money directly. If I could teach gapingvoid readers just one thing, that would be it.
17. I can’t imagine how I would have made the cartoons successful without the internet. I just can’t imagine a likely alternative scenario.
18. There are tons of cartoonists who write and/or draw better than me. If my work has one thing going for it, it’s the quite unique and unconventional life that I’ve always seemed to lead.
19. I’ve never envied people with “normal” lives. Nor have I ever envied the people without them.
20. My work generally isn’t for sale. You have to ask me to give you a drawing. And I have to be in the right mood at the time.
21. I have found the standard “struggling artist” myths and stereotypes mostly full of crap. Powerful magnets for Bullshitters, to say the least.
22. I don’t envy, admire or like pretty much 90% of the artists I meet. That’s not me just being old and jaded, that was just as true when I was a teenager.
23. I want to draw cartoons that rip the face off the reader. But in a good way.
24. I have no artistic ambition outside the cartoons. No desire to write a novel or anything like that.
25. I would never recommend to a young person to pursue a career in fine art. Even if she had a talent that was off the scale, I would be slightly hesitant.
26. The most important word in cartooning is “continuity”. Drawing a good cartoon isn’t difficult. Doing it repeatedly, day-in, day-out is far, far harder.
27. Cartoonists who don’t like to think much about the actual business they’re in, who are fond of saying, “I just want to draw” deserve everything they get.
28. Drugs and alcohol are lousy substitutes for inspiration.
29. The older I get, the more solitude the work seems to require.
30. The longer it takes you to become successful, the harder it will be for somebody else to take it away from you.
31. I increasingly find that, as I get older, the only subjects worth writing about are Love, Loss, Religion and Ambition.
32. Ten years ago, when my current cartoon format was “new”, there was a certain magic to it that now I SIMPLY CAN’T RECAPTURE. It took me many years to just let it go.
33. The format works for me because it forces me to keep things simple.
34. If the early days, most of my drawing was done sitting at a bar. Nowadays most of the work is done sitting at the kitchen table. They both have their pros and cons.
35. There’s something about being a celebrity, even a micro-celebrity that poisons the soul.
36. I can totally see why so many artists eventually become recluses, living in the boonies. I find myself increasingly heading in that direction, and I doubt I’ll lift a finger to stop it.
37. In the early days of the cartoons I was living in Manhattan. It would really tickle me when people would describe my cartoons as “SO NEW YORK”. Though now a wee voice tells me that if I still lived there, I’d probably be dead by now. I think a lot of ex-New Yorkers feel that.
38. One of the great things about the format is, hey, they’re just doodles on the back of business cards. It doesn’t matter if they’re good or not.
39. If you told me ten years ago that I would still be using this format pretty much exclusively in 2007, I don’t think I would’ve believed you.
40. I have never really given any serious thought to changing my format in all these ten years. Sometimes I find that odd.
41. Art is simply using the tools at hand to ask the question, “What is possible?” Painting, music, literature, it doesn’t matter what media one uses. What matters is the question.
42. No artist wants their best work behind them. But that day always comes.
43. I was fortunate. Somehow I managed to get the B-Plan baked into the A-Plan. And vice versa.
44. The good news is, my drawings will probably be worth a lot of money one day. The other good news is, I probably won’t be alive to see it.
45. I feel extraordinarily fortunate and grateful.
[Related Link: “How To Be Creative”. 10,000 words from 2004 etc.]