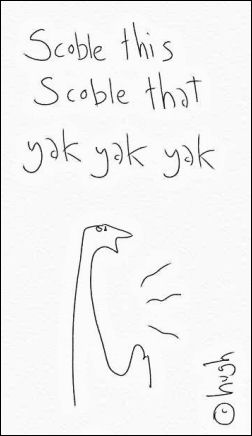 One trend that bloggers don’t want to talk about? A number of my blogging friends have seen their traffic go down lately. They assume that their readers are off in social networks. I think they are absolutely right.

For once I disagree with Robert. I DO want to talk about it. Because I actually concur with Robert’s thesis. And I am utterly delighted to do so.
In the past, say, from the late ‘nineties until the last six-twelve months or so, Bloggers’ readership grew IN PROPORTION to the social networks that were built up around them. Hence the phenomenon of the “A-List”.
But if we’re honest, looking back, it was always these circumventing social networks that were the really interesting part of the equation. The actual blogger in question, less so. Even if in our celebrity-worshiping culture, we sometimes forgot that.
Then suddenly, along comes stuff like Twitter and Facebook… et Voila! Suddenly, social networks start being successfully created without the “A-Listers” having to act like “Hubs” [or “Human Social Objects”, if you want to get REALLY technical]. Suddenly, the need for A-listers to arbitrate “Who the Cool Kids are” [and who they aren’t] is rapidly and thankfully diminished.
I totally applaud this development. Whatever your blogging strategy may be, I personally believe that on average, you’re far better off going off to somewhere like Facebook and building your own social network with like-minded folk, based on your own collective interests, your own collective passions and own collective sense of merit, than loitering around the Blogopshere, waiting for some rockstar like Scoble, Arrington, Cory etc to link to you… and hoping in vain that the latter will somehow transform your life. It won’t. Just ask my blog buddies, Kent Newsome or Seth Finkelstein, who always have a sharp and and insightful word to say on the matter.
The time of the A-List is dead. Thank Christ. Not a moment too soon.
[UPDATE:] Lovely afterthought from Rex Hammock:

When you set up a Facebook account, you’re not weighted down with the responsibility of being a publisher or writer or pundit or whatever it is that keeps most people from setting up a blog. On Facebook, you’re not a Facebooker — you’re just you. You can connect with people based on something other than linking to what that person just observed…

[Bonus Link:] An utterly BRILLIANT post for the 4th of July: The aforementioned Kent Newsome’s “Declaration of Blogging Independance.”. Ha!