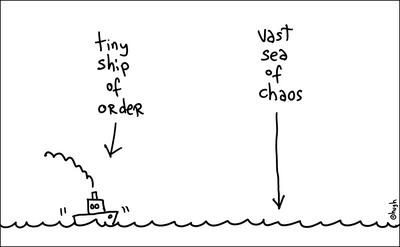 [Cartoon part of the Microsoft Blue Monster Series. Backstory from Steve and Kris etc.]
If you look in the comments of the previous post, you’ll see some really smart discussions about Microsoft going on.
Especially nice to see Robert Scoble [formerly of Microsoft] chiming in:

Steve: a lot of people inside Microsoft think what I did for three years [at Microsoft] was be an arrogant, egotistical asshat.
They missed the little secret sauce that I fell into by accident: these tools let you listen to customers and influentials and haters and respond.
I know of one cool team at Redmond that’s about to bring out something small at Mix07. It’s not a big thing that’ll kill Amazon or Google. It’s a small thing. But it’ll get lots of hype.
Why?
Because they demonstrated they are listening to the conversation that’s happening out there across tons of tech blogs.
That’s what’s magical about Microsoft letting average employees blog: it guarantees that a few will fall into the same secret sauce I did and will have to listen to people outside of Redmond for a few minutes a day.
It just was frustrating to me that I couldn’t get the leadership to really listen too.

Microsoft’s Steve Clayton [one of the guys responsible for getting me this gig] replied to Robert:

Robert – some good arguments. Big companies clearly find it harder to take risks and as you showed whilst at Microsoft, it’s the people on the ground who take the risks (both personal and on behalf of the company). Hugh got hired by some risk takers at Corp, not by Bill and Co.
With respect to Amazon, Google and others a major difference is Microsoft’s channel approach. Sure Microsoft will release something cool and innovative every now and then but more interesting is the channel of partners doing that on the Microsoft platform – people like Skinkers, Mydeo, Caspian, Horsesmouth, Dotnet, Thirteen23 and many more. That’s a pretty serious business engine that most observers of Microsoft miss. As Hugh says, we need to make them the rock stars as they’re a huge competitive advantage to Microsoft.

And of course, the unsinkable Dennis Howlett had something to say:

When the Blue Monster finally caves in and says: ‘we’re dicounting 90% on the commodity but you pay for the real extras’ then I’ll be a huge fan. As it is, Microsoft sucks calories from IT that it doesn’t deserve. That’s why it is pretty much shut out of recruitment in the Valley- where the innovators are working. Or at least that’s what your company’s innovation team leader tells me.
No amount of fun stuff that Hugh does will change that. This ain’t consumery stuff that you can decide to take or not. This is serious business stuff with real $$/££/€€ at stake.

Hopefully people inside Microsoft are seeing this…

@Scoble: Listening to the conversation is important, yes, but why isn’t this team a contributing part of the conversation yet? (I just assume that if they were already contributing, there would be some link love happening here.)
Is listening enough? Can MS afford just to listen, or is that really just the first step towards what they really need to do, which is to engage in the conversation?
Seems like way too much can still go wrong if you eavesdrop and just assume you’re hearing and understanding the right things.

which team are you referring to matt?

@Steve: I was referring to Scoble’s remark: “I know of one cool team at Redmond that’s about to bring out something small at Mix07. It’s not a big thing that’ll kill Amazon or Google. It’s a small thing. But it’ll get lots of hype.”
I have no idea what team it is, and he isn’t telling us. This gives me the impression that the team in question hasn’t fully engaged in the conversation.
They might be listening, which is good and all, but given what people say their problems are versus where the problem actually is… I think the divide between the two is sufficiently well known that it’s clear: it takes 2-way communication to solve the right thing.
The main exception, of course, is when the developers are also the prototypical users. For all I know, this is the case here.

aha…gotcha Matt. Sounds like the team has been listening but now keeping their powder dry for big announcment at Mix. I don’t know for sure though. We’ve been pretty poor at keeping secrets a surprise over the years so lets hope it’s a good one 😉

Matt: right, this team is in silent mode. Listening does NOT require talking! Although when they talk you’ll probably say “that’s cool.”
They all have blogs and Twitter accounts and read TechMeme.
But it’s only a small team of a handful of people. If I saw 10 teams like this I’d say Microsoft has an Internet strategy. But, so far, I’ve only seen a small number of teams. Out of 70,000 employees it’s sad that more aren’t engaging in the market conversation that’s going on on the street, not just on blogs.

@Steve and @Scoble:
First off, I hope this team is as awesome as it sounds. Clearly, I have no way of telling yet.
Listening does not require talking… but communication requires both. There are some conversations that can be understood just by listening, but many others that require 2-way interaction… Specifically, how do you know this team is so cool if no consumer is talking about it yet?
In this case, it probably is cool, based solely on the fact that your judgment seems mostly pretty good, Scoble.
But my point is that, in the general case, listening is not taking full advantage of a conversation. For instance, I’m currenty learning much more than I would if I read Hugh’s blog without commenting (as I usually have done).

Separate the noise from the music | VinnyCalzone.com