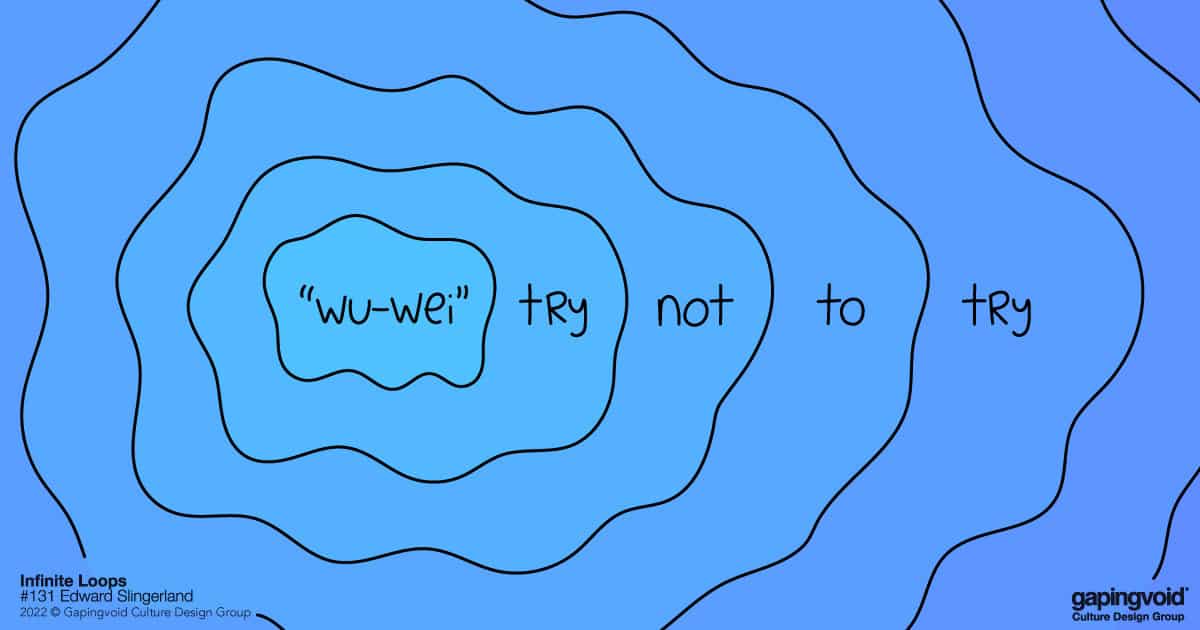 The philosopher and sinologist, Edward Slingerland was on the Infinite Loops podcast recently, where he discussed among other things his 2014 book, “Trying Not To Try,” about what the Chinese call “Effortless Effort” or “Wu Wei.”

Wu-Wei is all about being in the zone and being in a state of flow. It’s the idea that we achieve the best results spontaneously in those moments when we’re not trying so hard.

An Olympic figure skater doesn’t do her best performance because she’s there gritting her teeth, putting more effort in than the other competitors. In the moment, she gives herself completely over to her instincts, totally in flow, resulting in a performance that looks effortless.

But the paradox is that to achieve this requires years of grinding effort beforehand so that when she steps into the rink, she can turn the job completely over to her subconscious.

Like a lot of the best Eastern philosophies, it’s hard to explain, yet seems somehow obvious.

A more common way of looking at this is the idea of mastery – that moment when you reach that state of making difficult things look easy.

On his ninetieth birthday, the great British cartoonist, Ronald Searle, was asked what he remembered the most, looking back on his career. Instead of referencing some highlights like “that time I first got my work into the New Yorker” or “that time I met the Queen,” he said he just remembered the “kilometers of line” of black ink he had drawn.

He made it look easy. But it took him three-quarters of a century to do it.

This, we believe, is the secret to Wu-Wei. Not some mystical truth kept only for those enlightened few, but the simple idea of working really hard at something you love for so long that your subconscious mind is able to take over.