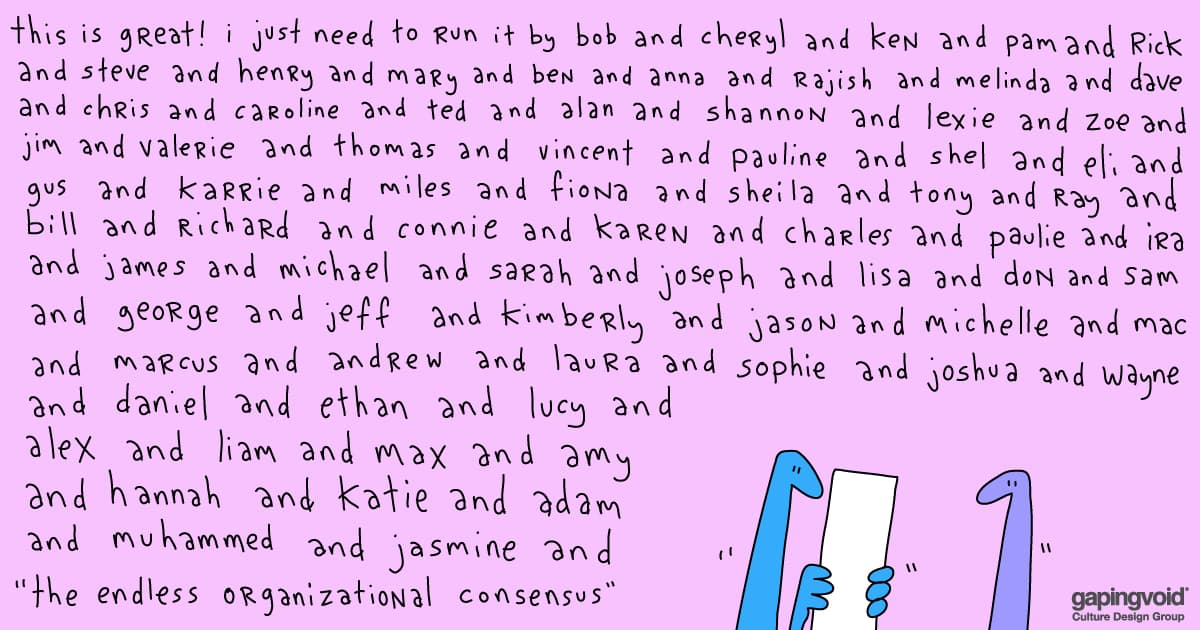 This is great! I just need to run it by bob and cheryl and ken and pam and rick and steve and henry and mary and ben and anna and rajish and melina and dave and chris and caroline and ted and alan and shannon and lexie and zoe and jim and valerie and thomas and vincent and pauline and shel and eli and bill and richard and connie and karen and charles and paulie and ira and james and michael and sarah and joseph and lisa and don and sam and george and jeff and kimberly and jason and michelle and mac and marcus and andrew and laura and sophie and joshua and wayne and daniel and ethan and lucy and alex and liam and max and amy and hannah and katie and adam and muhammed and jasmine and “the endless organizational consensus

In 1900, the consensus was, Europe was top dog, Europe would rule the world forever.

In 1920, Europe had destroyed itself, and the consensus was, Germany was finished.

In 1940, the consensus was, Germany was top dog, France and Britain were finished.

1960, the consensus was, the US and the USSR were joint top dogs, and this rivalry would remain forever.

In 1980, having gone through Vietnam, Nixon, Carter, the Civil Rights movement, and all that social upheaval, America was done, America was a spent force. It was just a matter of time until the Soviet Union left America behind in the dust.

By 2000, the consensus said, the Soviet Union was over and we had reached what Fukuyama called, “The End of History”, neoliberal democracy was the only game in town, including with China, at least, eventually.

In 2020, the consensus said, China is going to overtake America, and America will drown under a big wave of COVID and social turmoil.

What does all this tell us?

That consensus is usually wrong. And the bigger the issue, the more likely this is.

The lesson here is, although consensus is a good thing, organizations need it to function, after all – it’s just that the world is far more complex and unpredictable than the consensus normally allows for, so be careful.

PS. We got these insights from reading the books of George Friedman, the great geopolitical strategist. He’s worth a Google or two.