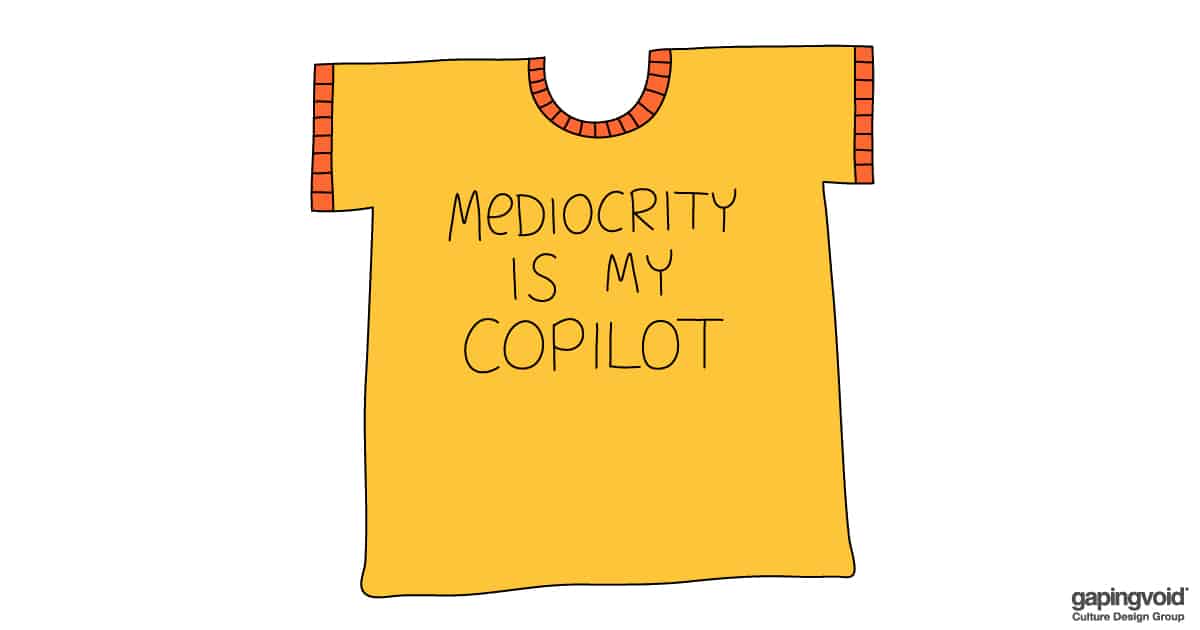 Paul Catmur is an old friend from our London days. An Auckland resident, Paul recently retired after a fairly successful career in advertising, including a long stint at Y&R London and eventually owning his own shop in New Zealand. Paul has been recently publishing a series of articles on Linkedin on the merits of mediocrity a fun, and entertaining contrast to the “Crushing it 24-7 aspiring zillionaire” culture most of us dwell in (or claim to dwell in). We’ve reprinted our favorite below. Though the business here might be advertising, the message is universal. If you have a child about to finish college and hit the job market, we strongly recommend you forward this article to them. They’ll thank you later.

A Manual for the Mediocre – Paul Catmur
Part Three
Get a job. Any job.

‘I know of no one more qualified to write about mediocrity.’

Sometime in the latter half of the last century, I was a student at the School of Communication Arts in London learning how to be an advertising copywriter. It was a well-respected college, but advertising was a very high-status job at the time and there were far more people trying to get in than there were jobs available. We had an advantage because at the end of the course we were promised an internship with a big London agency.

Advertising people can be rather sniffy about where they work and while there were a number of excellent agencies which we all dreamed of joining there were also quite a few rather dull ones.

My art director and I, for reasons of youthful arrogance, reckoned we were probably among the better teams at the college and therefore would be selected to go to one of the sexier agencies.

When the internships were announced we had a shock.

We were to be sent to Young & Rubicam London.

The advertising equivalent of cold porridge.

Y&R was a big, old, US-owned agency positioned in a soulless, ex-factory near Camden Town and possessed a reputation to match. Nobody was particularly excited at working there unless they were looking for somewhere quiet to end their career with a good pension plan.

Our mates commiserated with us for being sent to such a backwater as they headed off to the sexy agencies of Soho.

However we were actually quite chuffed.

You see, the aim of most of the students was to get a job at one of the best agencies in town.

It was just to get a job.

I didn’t care about being brilliant. I cared about being hired. I was 28, with a mortgage and had paid my own way through college. I’d gambled on being able to get a job and now I needed a payoff. While the small, boutique agencies did the best work, we figured that the likelihood of actually getting hired was pretty poor: they were small, they had the toughest creative standards, and they had the highest number of students chasing after a job.

Y&R’s mediocre output meant that nobody was fighting to get in there. But despite its unexciting creative reputation, it was big and profitable.

So off we went to Camden Town.

We were only supposed to be there for three weeks. But from our first day, we acted like we had already been hired. By that, I don’t mean that we turned up late, went for long lunches, and were drunk all afternoon. I mean that we did every tedious little job that we could find; we were polite to everyone we met (a real struggle for me), and we worked harder than anyone else in the building. Therefore, as I mentioned in my recent LinkedIn post we managed to extend our internship.

Before long the ongoing recession began to bite and the redundancies started. With people leaving suddenly a whole bunch of half-finished projects were left hanging in the air. Not sexy, foreign travel, TV jobs. But the small-scale, time-consuming sort of jobs that nobody else there could be bothered to do.

So we did them.

We didn’t do them particularly well, we weren’t good enough for that. But we did them fast, we didn’t complain, and despite having only been in the industry for a few weeks we managed to hit the level of mediocrity that was required. You don’t go to McDonald’s for L’Escargot a la Bourguignon.

Before long we were a two-man ad factory and we turned our internship into a job, straight out of college and in the middle of a recession. Not for being brilliant, but for being useful.

Compare our experience with another team from the same college.

Jimmy and Jenny were a good team. But they had creative principles. They didn’t want to work just anywhere. They weren’t interested in lesser places like Y&R they were only interested in one of the hot-shop agencies that did amazing work. But getting in there was tough. Really tough.

But they stuck to it and were eventually hired by an excellent creative agency.

It took them three years to get that job.

Three years of trudging around London from agency to agency, umbrella, and portfolio in hand.

Meanwhile, Mike and I had spent those three years going to innumerable agency parties, being taken out to lunch at The Ivy, and flying Business Class around the world. In between, we managed to get a great education of how the business worked, and even get a couple of half-decent ads out.

It’s true that we hadn’t been producing the brilliant work that Jimmy and Jenny were looking to do.

But who do you think had the most fun?

Make the most of your mediocrity.