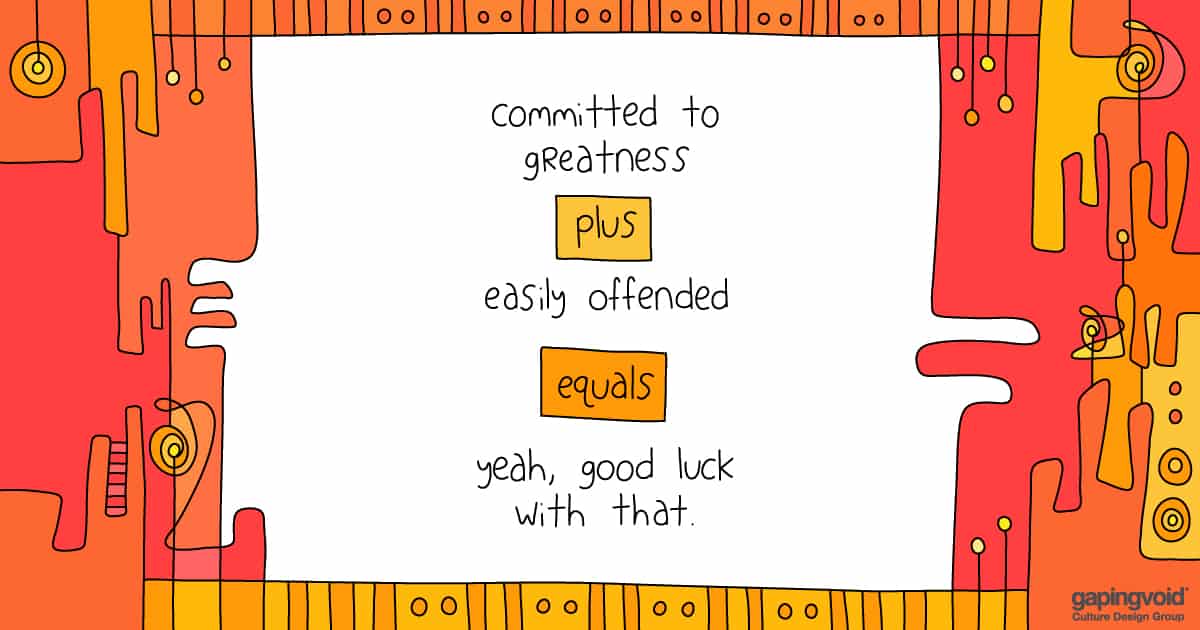 Some of our long-time FOGS ask us for more snark, like in the old days, so the above image is for them. Other folks. feel free to rant or rave here, if you so choose.

Our friends over at Basecamp are having a bit of bother.

The trouble started when the founders, Jason and David, tried to rein in the political conversations around the office, which at best they felt were becoming a big distraction away from their core mission, and at worst were actually damaging the business.

Next thing you know, this led to a big backlash on the employees’ side*, leading to a mass exodus of the company.

The Wall Street Journal has  a great take on it, as part of a larger phenomenon: “Its attempt to tell employees not to engage in discussions on societal and political issues during work shows how, after years of encouraging teams to ‘bring their whole selves to work,’ some companies want employees to bring a little less.”

A couple of points.

As Aristotle said millennia ago, too much of virtue is a vice. And what this new phenomenon seems incapable of doing, is drawing a line separating the two.

So what every CEO and/or leader is asking themselves is, where does all this end? When is it OK to rein it in, before or after the damage is done?

There’s just one problem. It doesn’t end. It just carries on, until there’s nothing left.

People have been subjected to memetic warfare, they are pawns in the battle to polarize society and this is the result. Creating flashpoints, tearing apart good companies created by objectively good people, who have effectively been manipulated by bad actors looking to degrade our civilization. We saw a very similar bruhaha recently over at MailChimp, good people who have built a great business, being drawn into conflict that in times past, would have been settled without the sweat and tears.

In an environment where everyone is looking to be offended, where anyone can take anything out of context and label it as racist, misogynistic, or inciting inequity, then anything and everything becomes subject to reinterpretation and weaponization.

We read Basecamp CEO Jason Fried’s post as trying to get stuff under control in an environment where people have been programmed to see the worst, take offense, and look for social inequity. It looks like the bad actors are winning and the good people of Basecamp (both management and workers) are simply collateral damage.

What easily offended people seem to forget is, just how much easier is it to tear something down, than to build something up. Businesses included. Our civilization included.

The thing is, we chose this.

*Making your customers the butt of your internal jokes is just plain stupid, so there isn’t any need to go into detail on that major detail.