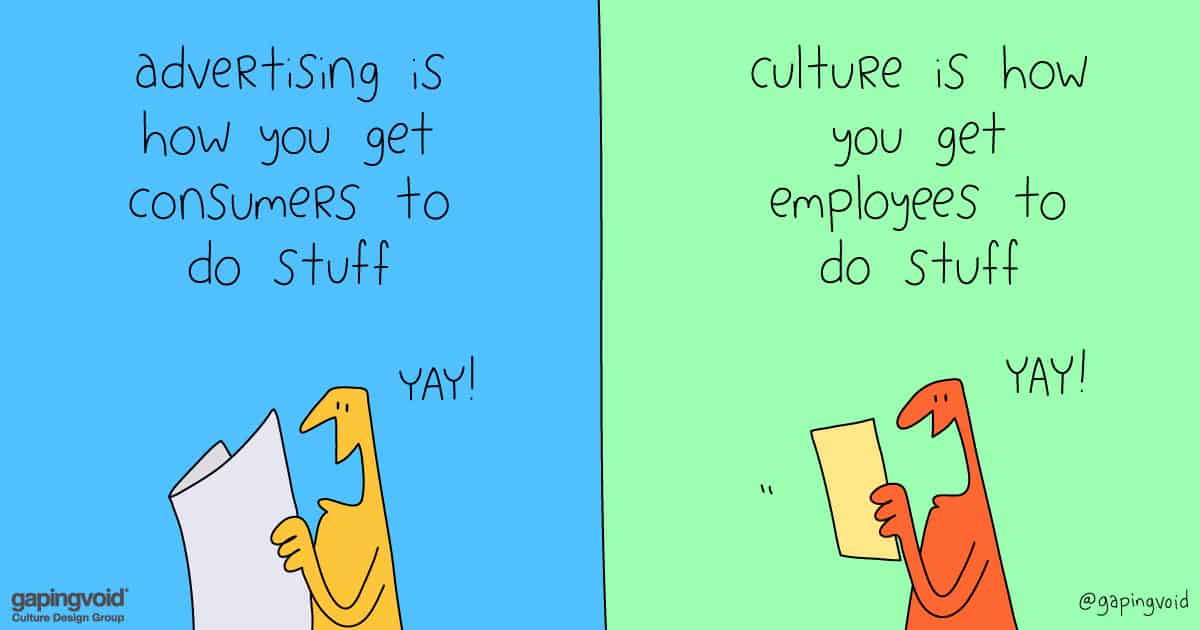 Another year, another massively expensive spectacle in which companies paid a reported $5.5 million for a 30-second spot in the Super Bowl — on top of all the costs for production and getting big-name celebrities involved. While the media discuss and debate which ads were best, here are some things we already know: the ads won’t “pay off” with increased sales in the short-term. But they’re still quite possibly worth the spend anyway. And there’s a crucial — but all too often missed — lesson in this for designing your corporate culture.

The Super Bowl ads are all about signaling. As Deacon Webster explained in Adweek, a brand’s ability to spend so much money “is one of the more confident demonstrations of its health and vitality. In other words, signaling.” It sends consumers the message, even subconsciously, that the brand is a real player for the long haul — so big, successful, and confident that it can throw around this kind of money. Similarly, a Harvard Business Review column called buying Super Bowl ad time “the equivalent of lighting money on fire (which can be more strategic than it sounds).”

Signaling is a process found in nature, as evolutionary biology teaches. Flowers do it to attract bees. A male peacock’s plumage is designed to attract peahens. Humans are experts at costly signaling. Depending on where you are and what people around you value, the signals may come in the form of fancy sports cars, champagne, Italian suits, French cologne, ripped abs, or original Picassos. The purpose of signaling is to be noticed and to demonstrate that you are worth engaging [read: mating] with. It shows that you are invested in a successful future.

When it comes to workplace culture, central to what people look for in a job, many companies attempt to signal. But they frequently make an amateur mistake.

How to really signal a commitment to culture

When looking to attract and retain the best workers, businesses often engage in empathetic hyperbole. They use slogans like “people first,” or insist that “people are our most valuable asset.” People hear these claims so often that they now understandably roll their eyes.

These claims also often make people uncomfortable. Why? Because they know that if you have to say it, it might not really be true.

Successful signaling runs deeper. It requires culture design. When you create a culture that actually puts people first, treating them as the most valuable asset, your employees know it. They feel it and as we demonstrated in our CEO Study, your customers and the press know it as well. None of your stakeholders need to be told. They see no dichotomy between your claims and reality.

How do you signal a real commitment to creating the best workplace culture, which we call High Purpose Culture? By implementing culture as a management system. Make all your corporate decisions — especially those that involve how employees are treated — through the lens of culture. As I explained in MIT Sloan Management Review:

All of these steps serve as crucial, daily signals. They lead to optimal behaviors and more meaningful connected work that positivity projects outward, creating a much more positive and favorable image for your company and brand. As the CEO Culture Study shows, optimal outcomes for businesses and their leaders are the natural outgrowth of successful culture design.

This is why the real value of successful signaling can’t be summarized with a simple ROI figure. Looking for ROI from culture is just like looking for short-term sales from Super Bowl ads. It misses the point.

Culture design brings about emotions and behaviors that drive your teams to feel a deeply held connection to your company. It is the long game. Culture design sends the message to your people and to the market that your brand is here for the long term. That you are credible, believable, and worthy of their business and their time. That while transactions matter, you care more about people.

It’s the ultimate signal. It’s costly. It requires commitment. And that’s exactly why it works.