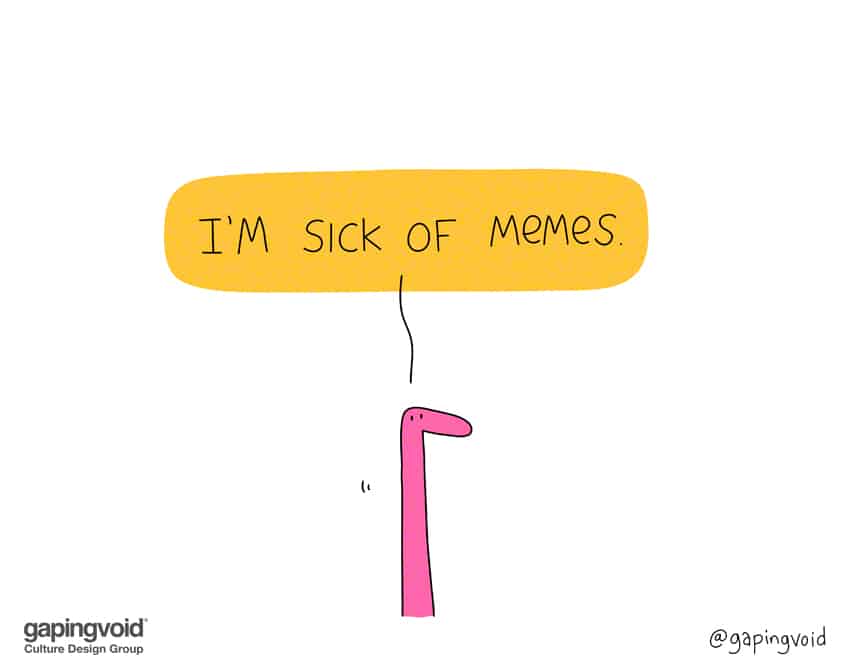 Eaon Pritchard is an advertising planner by trade and founder of the communications and behavioral design consultancy artsciencetechnology.com
He works out of Melbourne, Australia but helps companies all around the world solve problems by working with human nature rather than against it.
He is also the author of the cult advertising classic Where Did It All Go Wrong: Adventures At The Dunning-Kruger Peak of Advertising’, and his most recent book; Shot By Both Sides: What We Have Here Is A Failure To Communicate – published in January 2020.

It was not you who ate the idea, but the idea that ate you…

There’s a species of ant that will climb to the top of long blades of grass, and stop there, waiting to be eaten by passing cows or sheep.

Why? Well, the ant’s brain has been parasitised by a tiny bug called a fluke, that effectively ‘drives’ its host up the grass having turned it into a mini 4X4.

The bug’s reproductive cycle means it needs to be eaten and hitching a ride with the ant its way to achieve this.

It was not you who ate the idea, but the idea that ate you…

So says the villain Pyotr Stepanovich in Dostoevsky’s ‘Demons’.

As with all Dostoevsky’s fiction, ‘Demons’ is about how ideas can take hold of people, and the effects that these ideas can have on their hosts and on the people around them.

Like Fyodor’s Demons, parasites (and viruses) will routinely hijack hosts to suit their own genetic agenda, often with grim consequences for the vehicle.

In ‘The Selfish Gene’ Richard Dawkins explains why specific bad ideas seem to persist, despite being detrimental to the minds they inhabit.

Dawkins’ simple answer was this. Because it is only the ideas themselves that benefit.

To emphasise this parallel to the ‘gene’ of natural selection, he coined the term “meme”.

Memes are mind viruses, they don’t care about the welfare or otherwise of their hosts. The only thing that counts, from the memes’ perspective, is that they persist.

Ideas are in competition with each other to infect minds.

For a meme to survive and spread in a competitive environment, it must have attributes which give it advantages over other memes.

Is there any reason why any data – just like fashions, behaviours, catch-phrases, and internet memes – wouldn’t also replicate and evolve, actively looking for ways to propagate themselves?

Dawkins suggested that humans were just ‘survival machines’ for genes.

Genes were ‘selfish’. All they want is to replicate and survive. In effect, genes ‘created’ organisms for their own propagation.

Viewed from this perspective, minds and by extension, digital devices are ‘survival machines’ for memes. Mechanisms for data in the ‘primordial soup’ of human culture attempting to transmit themselves to future generations.

Dawkins said ‘whenever conditions arise in which a new kind of replicator can make copies of itself, the new replicators will tend to take over, and start a kind of evolution of their own.’

Memes are this new form of replicator that parasitise brains. They propagate themselves in the meme pool by jumping from mind to mind going anywhere information can go. They compete with one another for that most limited of all resources. Attention.

The tipping point for the memes was in the mid-50s. They created a new transmission vector, broadcast television. They could now travel faster and farther infecting fresh minds by the millions.

Next, they created the internet, an almost perfect new milieu for replicators.

The meme itself quickly became a meme.

It worries some people to think that an organism (human) is just a gene’s way of making more genes. But what if we are not even in charge of our own minds?

The memes themselves created minds as vehicles for the propagation of memes.

The philosopher Daniel Dennett asserts that ‘a human mind is itself an artefact created when memes restructure a human brain to make it a better habitat for memes’.

So who’s in control now?

Humans struggling to deal with the tsunami of data that has found its own way to replicate exponentially? Or the idea replicators themselves?

If, as Dawkins proposed, humans are just survival machines for genes and memes – we had better find out a way to be useful in the new AI, Machine Learning digital universe.

The memes may have created a better replicating environment and probably don’t need us anymore.