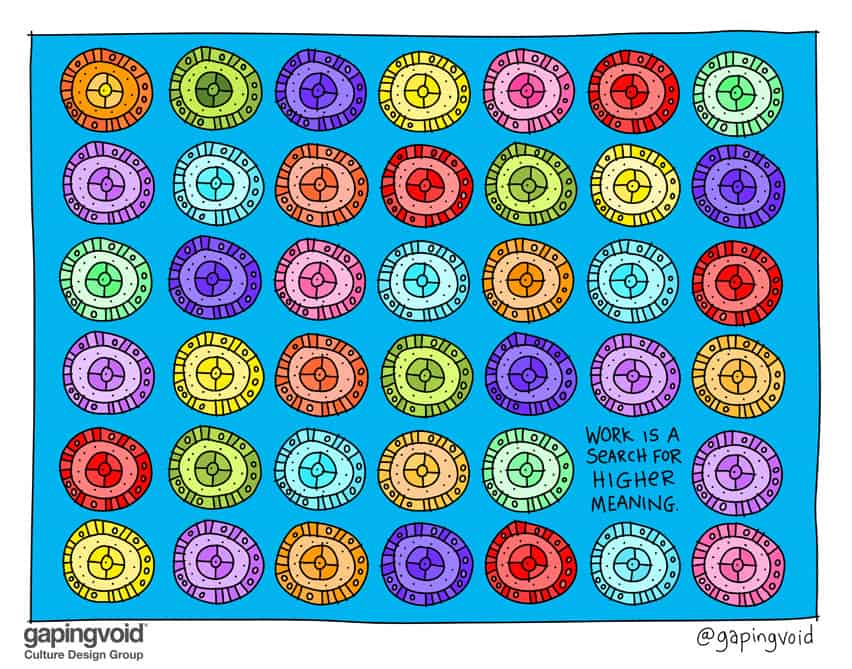 “Meaning scales” is a phrase we’ve been using regularly since 2004.

Basically, it means you don’t have to be a billionaire or a celebrity or a “Master of the Universe” in order to have a great career.

You might be better suited to say, owning a candle shop in Laguna Beach, or a pizza joint in Greenwich Village, or a wee law practice in Nashville.

Or hey, maybe a day job with a big company like Dell or Exxon Mobile might be more your jam. Whichever way, you can still rock out. Meaning scales. You tell me.

You could say this is a very American idea of work, compared to say, Europe, where meaning in work is thought to have a lot more to do with social standing, which family you belong to, or which club or guild has you for a member, etc.

And looking even more closely, this American idea of work is really an American Protestant idea of work (Protestant Work Ethic), going back even further to a very early Christian idea that the Divine- i.e the ultimate measure of “meaning”- is (lower case) “Catholic”, i.e. available to anyone and everyone, not just the elites and or the priests.

We’re not trying to give a lesson in theology, here. We just think it’s interesting how so many fundamental ideas in business have such deep roots. Worth thinking about.