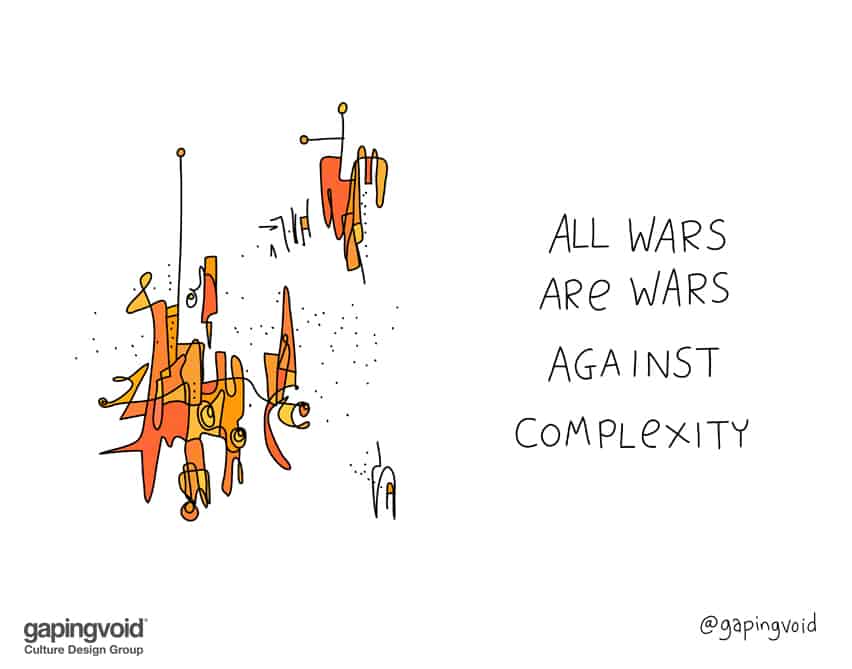 “How did you go bankrupt?”
“Two ways. Gradually, then suddenly.”

One of the best things I’ve read in the last ten years was this wonderful 2010 blog post by Clay Shirky on complex business models:

“In 1988, Joseph Tainter wrote a chilling book called The Collapse of Complex Societies. Tainter looked at several societies that gradually arrived at a level of remarkable sophistication then suddenly collapsed: the Romans, the Lowlands Maya, the inhabitants of Chaco canyon. Every one of those groups had rich traditions, complex social structures, advanced technology, but despite their sophistication, they collapsed, impoverishing and scattering their citizens and leaving little but future archeological sites as evidence of previous greatness. Tainter asked himself whether there was some explanation common to these sudden dissolutions.

“The answer he arrived at was that they hadn’t collapsed despite their cultural sophistication, they’d collapsed because of it. Subject to violent compression, Tainter’s story goes like this: a group of people, through a combination of social organization and environmental luck, finds itself with a surplus of resources. Managing this surplus makes society more complex—agriculture rewards mathematical skill, granaries require new forms of construction, and so on.

“Tainter’s thesis is that when society’s elite members add one layer of bureaucracy or demand one tribute too many, they end up extracting all the value from their environment it is possible to extract and then some.

“The ‘and them some’ is what causes the trouble. Complex societies collapse because, when some stress comes, those societies have become too inflexible to respond. In retrospect, this can seem mystifying. Why didn’t these societies just re-tool in less complex ways? The answer Tainter gives is the simplest one: When societies fail to respond to reduced circumstances through orderly downsizing, it isn’t because they don’t want to, it’s because they can’t.”

In a world that values ever more letters coming after one’s name, this penchant for simplicity is underrated.

There’s a reason why successful, big companies like to keep it simple. Could you imagine what would have happened if Exxon Mobil had decided to expand into car making and merged with Chrysler or Ford? Or if Starbucks decided it wanted to get into the fast-casual restaurant space and bought out Applebee’s or Pei Wei?