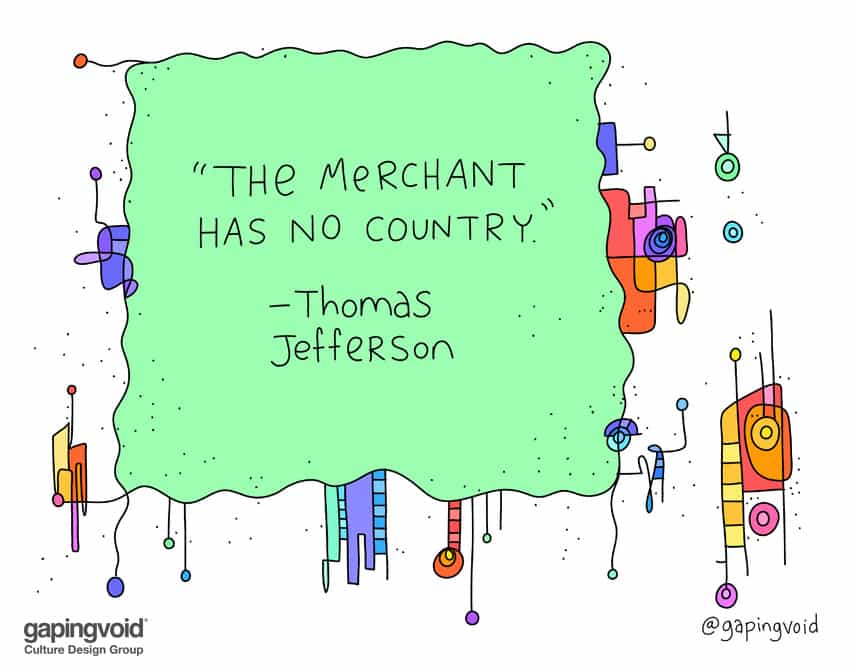 When we think of the world, we mostly think of “countries” being the basic unit of mass human organization. The French do it a certain way, as do the Germans, as do the Americans, and so on.

But this country-centric idea of nationhood is actually a pretty new idea, going back only to 1648 and the Peace of Westphalia when all the European crowns got together and made official the other countries’ right to exist.

Before then, the king just ruled over what territory he could command. Richard the Lion Heart was technically king of England, but he spent far more time in France and in the Holy Land. Before Westphalia, the idea that people had their own land, their own government, their own tongue, their own integrity, their own culture, their own nation wasn’t a thing.

And this is an idea that you can certainly bend. In the 1975 Science Fiction movie, Rollerball, wars weren’t fought between countries, but between corporations.

And it’s being bent in real life: The Kingdom of Denmark has just appointed a new Ambassador… not to a country, but to Silicon Valley.

They figure that *big* companies like Google and Facebook affect them more than say, *small* countries like Thailand and Malawi (and are in fact richer and more powerful than many small countries). Quote:

“What has the biggest impact on daily society? A country in southern Europe, or in Southeast Asia, or Latin America, or would it be the big technology platforms?” Mr. Klynge said in an interview last month at a cafe in central Copenhagen during an annual meeting of Denmark’s diplomatic corps. “Our values, our institutions, democracy, human rights, in my view, are being challenged right now because of the emergence of new technologies.”

You could say the Peace of Westphalia and the idea of a “nation-state” is a modern idea that emerged at the beginning of the modern age.

As we leave the modern age and “Modernism” itself behind, this Danish thing is a very *postmodern* idea for an increasingly postmodern era. A taste of what’s to come.