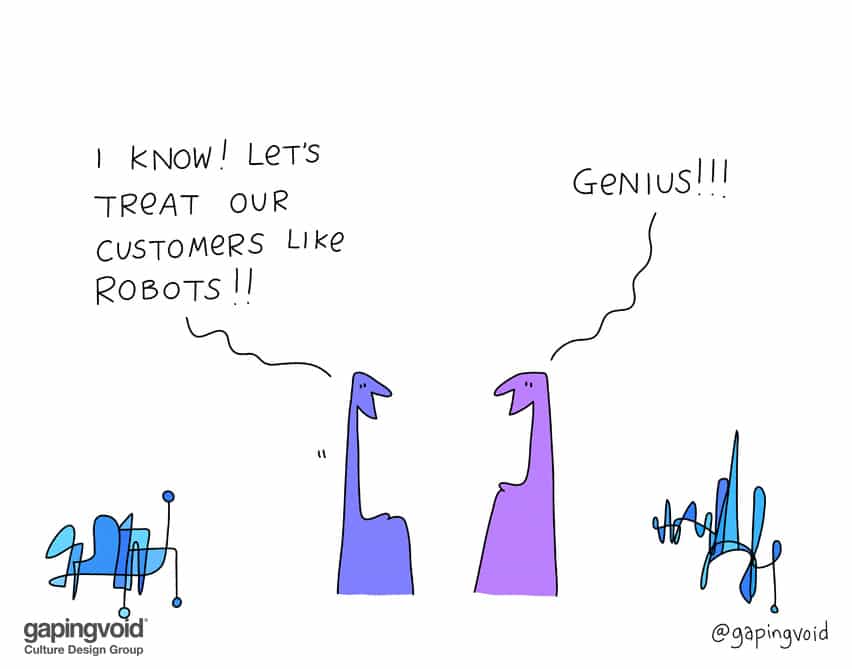 The battle between free-will and determinism is not one that is customarily associated with the marketing or communications industry.  Thankfully, it’s more often played out in great art.

Macbeth and Othello, for example, remain things of wonder because they are psychologically fascinating but also because in their downfalls it is so hard to see where the inevitability of their fates takes over from the power of their free will to avoid tragedy.

In Shakespearean tragedy, the reductive forces of plot and circumstance that oblige a character to act ‘thus or thus’ and slide them towards doom, battle with the character’s passions, humanity and ‘better natures’; forces that try to keep them in check and, well, just stop them from stabbing or smothering people in the case of Macbeth and Othello!

My parallel is that modern-day marketing and communications are currently more in thrall to the fatalists and reductive thinking in the form of new data types and the forces of automation than it has ever been and whilst more and better data should not mean worse marketing and campaigning I fear that often it does because it can undermine qualitative decision-making (our better creative natures). . . and I say this as someone who has just launched an online research business!

As an example, I have become a fascinated viewer of visitors to my own new company’s website through the lens of Hotjar.  Hotjar captures ‘video’ of visitors and customers to your site by recording their actions as they navigate between your pages and content and forms and so tells you with brutal directness what works and what does not.  It is brilliant and an hour with Hotjar is like a session with the most uncompromising counselor. It strips away vanity and bluster and leaves you naked with your customer and product. It can be quite uncomfortable.

But Hotjar like so many of the wonderful new data applications and services just records the very last and most direct of consumer actions and interactions with your brand.  And whilst these can be the most commercially significant (and certainly they are for our SaaS business) that does not mean they are the most important.

That someone visited your site because they read some compelling editorial or saw an awesome old school TVC, or they just admire your brand because it supports a cause they agree with or just makes them feel good about themselves might be driving that visit and last click but you would rarely know from this sort of reductive data.

Top-level branding, reputation building, and the great strategy and creative that underpin it are underrepresented in modern marketing.  We increasingly rely on immediate measures (or bottom of the funnel if you must) because short-term financial rewards can be gained and promotion or bonuses earned.  Simplistic reductive thinking which implies that ‘because of this action (and only this action) that result happens’ is like claiming that the only reason Macbeth killed King Duncan was that his wife nagged him or that Othello smothered Desdemona purely because he found the gift he gave her in the possession of another man.

The determinist, seductive sirens of last-mile data sing most loudly to the sales-driven, to the inexperienced and to those least likely to appreciate that great brands are built on compelling ideas that competitively differentiate for the long term and that sometimes not all that value can be measured by last click data.

It’s been a matter of faith for most in marketing since the arrival of social media that the crowd has wisdom. Those brainboxes at the Harvard Business Review (HBR) have revisited the subject in their usual robust and energetic way and the results are fascinating because they back up the faith some of us had in this phenomena (ie anyone who read the Cluetrain Manifesto). In their new research, HBR found that “the wisdom of crowds is more robust than previously thought — it can even withstand the groupthink of similar-minded people. But there’s one important caveat: In order for the wisdom of crowds to retain its accuracy for making predictions, every member of the group must be given an equal voice, without any one person dominating.”

I agree! Too much automation, not enough qualitative decision-making!