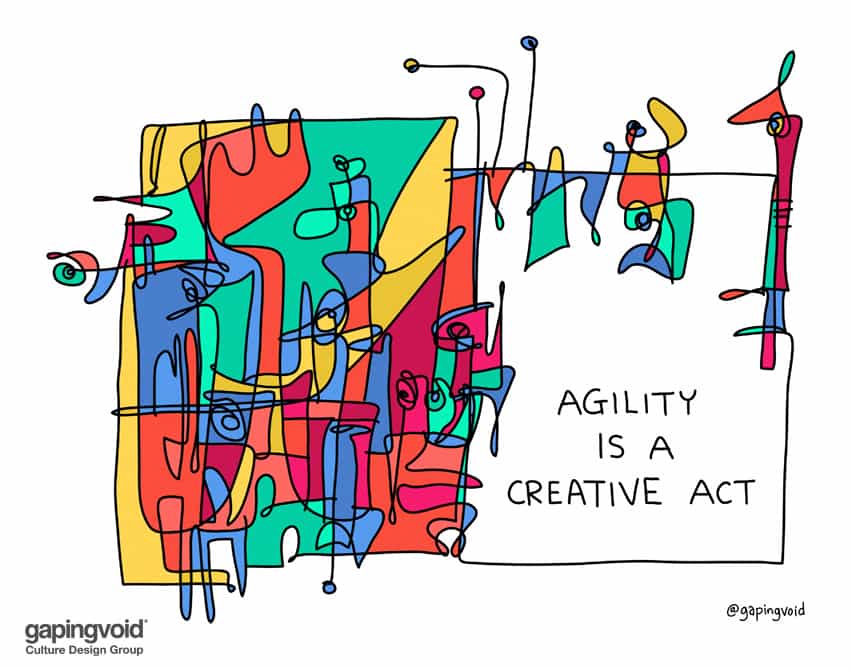 Sure, we could be talking about Agile software here as well, but I was thinking more of business agility in general?

What is agility? I’d call it having or maintaining the ability to act quickly and cheaply. Much more so than the usual competition.

For example, take the chef who, instead of waiting ten years to open a restaurant, opens a food truck inside a month. That’s agility.

Or the filmmaker who, instead of moving to Hollywood and waiting a decade to get his first break, starts making films on his iPhone and uploading them onto YouTube. That’s agility.

Or the illustrator who moves to Mexico so he can live dirt cheap while he builds up his portfolio. That’s agility.

I knew an advertising entrepreneur in London who, in the 1990s, ran the equivalent (in billings) of a 50-person ad agency out of his basement flat in Queensway, using just a handful of freelancers and some ruthless ideas about fat-trimming. That’s agility.

The idea of “agile” isn’t just about cutting costs. It’s about structuring things in a way so you can produce more and more iterations, faster than the next guy.

Or my friend Jeremiah, who instead of renting an expensive office in Silicon Valley, bought an old Airstream trailer, put it in his backyard and turned it into an office. That’s agility.

If you want to be an entrepreneur or do something creative, agility may not be the only trait you need, but it is one of the main ones. It also can be a lot of fun, as well, so why not?