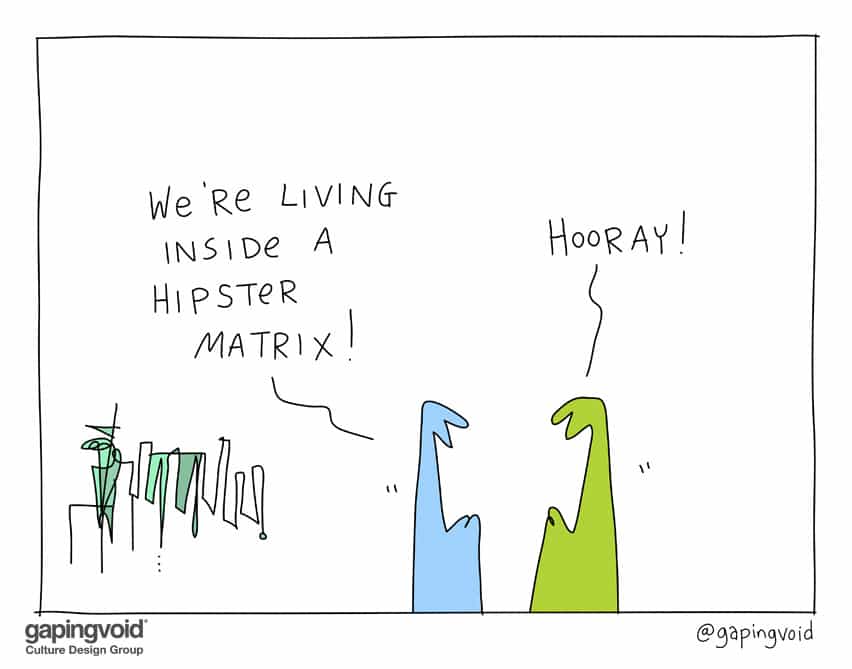 So, if young adults no longer have the kind of money to support a life of conspicuous consumption our generation did, what takes its place?

Why, conspicuous production, of course.

My Twitter buddy, Venkatesh a.k.a. @vgr wrote a devastatingly hilarious rant a few years ago, called “You Are Not An Artisan”. His beef is with a certain brand of hipster who, having decided the modern economic reality is not for them, reverts to an old-fashioned, deliberately backward looking profession say, an old-timey barber shop, farm-to-table restauranteur, or a maple syrup stand at a big city farmer’s market.

Poppycock, says Venkatesh. Sure, it’s fine if a few people do it, but the number of people the modern economy can support this way is TINY, the same way the relative number of art galleries a city can support is tiny.

Perhaps. But hey, the way I see it, if you manage to pull it off, you’ll have a lot more respect in the community than say, a job at Taco Bell. Maybe it’s worth the risk. Nothing ventured, nothing gained.

And lucky for them, they’re still young and can recover. At least they learned something.

A lesson that wasn’t painful to get, isn’t worth having. Right?

The only other alternative is finding a safer path, which, as we all know, doesn’t guarantee safety over the long run.

So welcome to the hustle, Young Person. We need more of y’all round here. Godspeed.